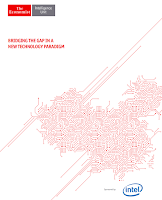 "China's consumers lead the world in their fast adoption and frequent use of new technologies such as mobile payments, online financial management and e-commerce," according to a report by The Economist Intelligence Unit (EIU). Released by the EIU on May 31, 2017, Bridging the gap in a new technology paradigm explains: "With consumers setting the pace, Chinese companies are adopting new technologies to deliver products and services, and view this uptake as crucial for future success. While the world now hears much about China's big technology players Alibaba, Tencent and Baidu, less is known about smaller tech players or about the technology adoption of companies in traditional industries." Focusing on the latter, the report, which is available in both English and 简体中文, is the result of the EIU surveying "350 companies across China on their attitudes, plans and strategies toward adopting technology solutions to improve their products or services, with a focus on the finance, retail and healthcare industries."

Commissioned by Intel China, the EIU conducted the survey from February to March 2017 among companies headquartered in mainland China. They polled 50 respondents from each of the finance, retail and healthcare sectors, with the remainder spread across various industries. One in four respondents hailed from companies earning less than US$200m in annual revenue, while 13 percent were from companies that earn US$10bn or more. One in four held C-suite or board titles, while the remainder were senior executives and managers. Geographically, 39 percent work in Beijing, Chongqing, Guangzhou, Shanghai, Shenzhen or Tianjin, and the rest in smaller urban areas.

The report's key findings are listed below in its entirety as found in the Executive Summary:
The report's conclusion says:

For years technology has allowed companies in China to boost internal efficiency by speeding up internal processes, reducing input per unit of output and helping firms get better at going about business as usual. Now a new paradigm is emerging: the incorporation of cutting-edge technology such as cloud computing, big data and remote connectivity directly into products and services themselves. This is transforming the very nature of a firm's output, helping them reach new markets and please their customers, and in some cases laying the groundwork for entirely new business models.

The challenges for China's legacy industries, particularly those in the healthcare, finance and retail space, are to take more agency over the technological advances that are transforming the Chinese business world and develop more in-house platforms that can help them reach their goals. In some cases this is already happening. Many, however, will need to forge or deepen partnerships with companies such as Tencent, Alibaba, Baidu or their smaller counterparts in the technology space, whose innovations will likely continue diffusing into the wider Chinese business world for the time being.

Do you agree with the report's findings and conclusion?

Aaron Rose is an advisor to talented entrepreneurs and co-founder of great companies. He also serves as the editor of Solutions for a Sustainable World.
Posted by Aaron Rose at 2:43 PM