Asia Pacific is on track to become the world's largest 5G region by 2025, led by pioneering 5G markets such as Australia, China, Japan and South Korea, according to the latest edition of the GSMA's Mobile Economy report. Authored by GSMA Intelligence, the research arm of the London, England-based GSMA, The Mobile Economy: Asia Pacific 2018 further says Asia's mobile industry added $1.5 trillion in economic value in 2017, equivalent to 5.4 percent of regional GDP, which includes direct ecosystem contribution (1.8%); indirect contribution (0.6%); and productivity improvements (3.0%).

In addition, the report explains that "growth has reached its peak and has started to taper out: between 2017 and 2025, the subscriber base is set to increase by a CAGR of 1.8%, down from 6.0% over the previous four years. Three key factors explain this slowdown:
"Despite reaching its peak in terms of subscriber growth, Asia Pacific will account for just over half of new subscribers globally by 2025. We forecast 424 million new subscribers to be connected across the region by 2025, bringing the total to 3.2 billion, or 73% of the population."

The report points out that 2017 saw the first year when 4G surpassed 2G in total share of mobile connections. "The region is home to some of the world's most advanced markets in terms of 4G adoption, such as South Korea, Japan and Australia. However, emerging markets (including India, Bangladesh and Indonesia) will be the key drivers of 4G growth over the next few years. Across the region as a whole, 4G is expected to surpass 50% of connections by 2019 and will then dominate to 2025."

What is more, "5G will gain a foothold in the region by the end of the decade. With launches expected from 2019, networks covering 37% of the population by 2025, and increasing availability of 5G-enabled devices, 5G connections will scale rapidly, particularly in markets such as China, South Korea, Australia and Japan. By 2025, we forecast 5G connections to reach 675 million across Asia Pacific, accounting for more than half of the global total for 5G."

In addition to the aforementioned GDP growth rate, "the mobile ecosystem supported more than 17 million jobs and made a substantial contribution to the funding of the public sector, with almost $170 billion raised in the form of general taxation. By 2022, the mobile economy in the region will generate more than $1.8 trillion of economic value added as countries continue to benefit from the improvements in productivity and efficiency brought about by increased take-up of mobile services."

Moreover, the Asia Pacific "region has become the world's largest retail e-commerce market, driven by the burgeoning economies in China, Japan and South Korea, where payment platforms such as Alipay, Apple Pay and Samsung Pay are fast becoming ubiquitous. More recently, however, a combination of market and demographic factors has resulted in countries in Southeast Asia, including Indonesia, Thailand and Vietnam, becoming the key drivers of growth. Mobile internet users in these markets are among the most engaged globally on e-commerce platforms such as Lazada, Shopee and Tokopedia, which provide scalable, readily accessible platforms for smaller retailers to transact online with their customers."

As a supporter of startups, I found particular value that "the startup ecosystem in Asia Pacific is growing rapidly, with the number of active tech hubs in the region's emerging markets doubling over the last year and venture funding into South/Southeast Asian countries tripling since 2016. Most emerging markets in the region are benefiting from big deal flows and growing interest from international investors, taking advantage of the optimism to improve their ecosystems and acting as alternative investment destinations to the more established markets."

Having traveled to the Asia Pacific region on a number of occasions over the past few years, I have witnessed how the large-scale societal adoption and use of digital technologies has become "a key driver of measurable economic, social and cultural value, including increased productivity, a rise in employment rates, improved security and greater capacity to tackle social and environmental issues.

"Despite rapid growth in mobile internet penetration in recent years," the report claims "2.4 billion people in Asia Pacific remain offline, mostly in low- and middle-income countries, unable to benefit from the social and economic opportunities of the internet. As challenges around infrastructure, affordability, consumer readiness and content are addressed, an additional 1 billion people will gain access to the mobile internet across the region by 2025, bringing the total to 2.7 billion, or 63% of the population.

The GSMA report encouragingly notes that "[m]obile is also playing a key role in tackling various social and economic challenges as outlined by the UN’s Sustainable Development Goals (SDGs). While the mobile industry's contribution can be seen across all 17 SDGs, there are two areas of particular relevance in Asia Pacific: firstly, leveraging mobile operators' big data capabilities to address humanitarian crises, including epidemics and natural disasters; and secondly, supporting initiatives in low- and middle-income countries to reduce the gender gap in mobile internet and mobile money. Mobile technology provides access to tools and applications that help address these issues, and enables new technologies and innovations to build more efficient and environmentally sustainable societies."

"As more countries continue to implement their strategies for digital transformation, proving identity online will become essential to participation and inclusion. To create digital societies, governments worldwide recognize the importance of a digital identity – being able to verify an individual's identity electronically. A digital identity acts as a gateway to enable faster and easier interaction with public institutions, and is essential for individuals to participate in a full digital lifestyle."

I strongly agree that "data privacy and the security of digital identities has assumed greater importance." The report adds: "While mobile operators apply high standards of privacy, data protection and security for their customers' data, the inadequacy of legal frameworks can worsen customer perceptions about operators' use of their data and potentially reduce their willingness to use mobile devices to access identity-linked services. A digital identity system must have a foundation of trust if it is to generate widespread acceptance among users."

Crucially, the report suggests "[c]oncerted action between governments and mobile operators can help reap the benefits that stem from digital identity and address the challenges presented by increasing cross-border data flows and cyber-attacks that affect digital commerce between countries and overall trade. When governments develop a national strategy underpinned by an enabling policy environment, the prospects are much better for mobile-enabled, digital identity services to accelerate a country's digital transformation, support digital and financial inclusion, and offer the benefits of convenience and reach." 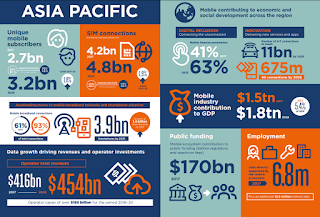 What aspects of GSMA's report do you find valuable to your business?

Aaron Rose is an advisor to talented entrepreneurs and co-founder of great companies. He also serves as the editor of Solutions for a Sustainable World.
Posted by Aaron Rose at 1:03 AM