Looking Beyond Blockchain's Hype for its Strategic Business Value

As mentioned in a previous post on this blog, my colleagues and I are making efforts to better understand the workings of blockchain, which is a distributed ledger, or database, shared across a public or private computing network. Our efforts include reading an increasing number of articles coupled with attending events where we meet people whom are experts in the technology, founders of startups or managers representing investment firms that provide financial support to such startups. Despite the hype and enthusiasm surrounding blockchain, I am concerned about the lack of business model or strategic business value for the emerging technology.

In an article published by McKinsey & Company entitled "Blockchain beyond the hype: What is the strategic business value?" the authors note:


Blockchain was a priority topic at Davos; a World Economic Forum survey suggested that 10 percent of global GDP will be stored on blockchain by 2027. Multiple governments have published reports on the potential implications of blockchain, and the past two years alone have seen more than half a million new publications on and 3.7 million Google search results for blockchain.

Most tellingly, large investments in blockchain are being made. Venture-capital funding for blockchain start-ups consistently grew and were up to $1 billion in 2017. The blockchain-specific investment model of initial coin offerings (ICOs), the sale of cryptocurrency tokens in a new venture, has skyrocketed to $5 billion. Leading technology players are also heavily investing in blockchain: IBM has more than 1,000 staff and $200 million invested in the blockchain-powered Internet of Things (IoT). 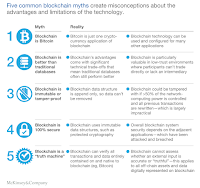 However, "Despite the hype, blockchain is still an immature technology, with a market that is still nascent and a clear recipe for success that has not yet emerged. Unstructured experimentation of blockchain solutions without strategic evaluation of the value at stake or the feasibility of capturing it means that many companies will not see a return on their investments. With this in mind, how can companies determine if there is strategic value in blockchain that justifies major investments?"

The article presents results from research that "seeks to answer this question by evaluating not only the strategic importance of blockchain to major industries but also who can capture what type of value through what type of approach. In-depth, industry-by-industry analysis combined with expert and company interviews revealed more than 90 discrete use cases of varying maturity for blockchain across major industries."

The article further suggests companies should take the following structured approach in their blockchain strategies:
"With the right strategic approach, companies can start extracting value in the short term. Dominant players who can establish their blockchains as the market solutions should make big bets now." 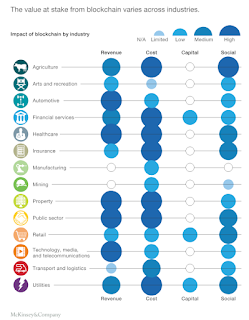 I am not questioning the value of blockchain in itself or the technology's ability to transform a variety of sectors including agriculture, financial services, healthcare, insurance, manufacturing, retail, and transport and logistics. However, having witnessed the rise of the dot-com bubble in the 1990s and its crash in 2001, I hold reservations about the mad rush to dump money in companies focused on developing solutions around blockchain. Many of the companies I have encountered over the past few years have yet to present a viable business model that addresses the fundamentals every venture should be incorporating including a plan to monetize the technology, a coherent sales and marketing strategy, and a strategy to mitigate various risks that will prevent their business from becoming a successful (i.e., profitable) enterprise.

The McKinsey article begins by noting: "Companies can determine whether they should invest in blockchain by focusing on specific use cases and their market position." Good advice when trying to avoid the business trap of "if you build it, they will come."

Do you have concerns about blockchain's strategic business value?

Aaron Rose is an advisor to talented entrepreneurs and co-founder of great companies. He also serves as the editor of Solutions for a Sustainable World.
Posted by Aaron Rose at 5:15 AM