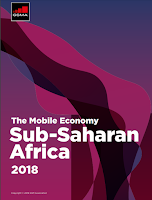 Released at its 'Mobile 360 – Africa' event held in Kigali, Rwanda, The Mobile Economy Sub-Saharan Africa 2018 report published by the GSMA says more than half the population of Sub-Saharan Africa will be subscribed to a mobile service by 2025. Authored by GSMA Intelligence, the research arm of the GSMA, the report forecasts that there will be 634 million unique mobile subscribers across Sub-Saharan Africa by 2025, equivalent to 52 percent of the population, up from 444 million (44 percent) at the end of 2017. The report also calculates that the mobile ecosystem will add more than $150 billion in value to Sub-Saharan Africa's economy by 2022, equivalent to almost 8 percent of regional GDP. The report presents five key points.

"Subscriber growth in Sub-Saharan Africa has slowed in recent years as the industry confronts the challenges of affordability and a youthful population," the report explains. "Growth rates in the region have fallen well below the double-digit annual rates seen in the first half of the decade, and the compound annual growth rate (CAGR) for the next five years is around half the level recorded over the preceding five years. Future growth opportunities will increasingly be concentrated in rural and low-ARPU markets, as well as younger demographic groups. World Bank data indicates that around 40% of the population in the region are under the age of 16, a demographic segment that has significantly lower levels of mobile ownership than the population as a whole."

Transition to mobile broadband: 5G on the horizon 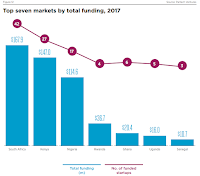 The report adds that "smartphone adoption continues to see rapid growth in the region, albeit from a relatively low base and despite affordability challenges. The total number of smartphone connections stood at 250 million at the end of 2017, equivalent to around a third of the total connections base. Smartphone adoption is helping to drive strong growth in data traffic across the region, although mobile operators will face challenges in monetizing the ongoing data traffic growth amid regulatory moves to reduce out-of-bundle charges and ongoing competitive pressures."


In addition to the aforementioned economic statistics, the GSMA says Sub-Saharan countries will "continue to benefit from improvements in productivity and efficiency brought about by increased take-up of mobile internet in particular." 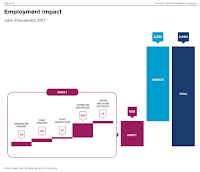 Moreover, "The mobile ecosystem supported almost 3 million jobs in 2017. In addition to the impact on the economy and labor market, the mobile sector also makes a substantial contribution to the funding of the public sector, with almost $14 billion raised in 2017, taking into account general taxation as well as sector-specific levies on the consumption of mobile services."

The report points out that "[f]or many consumers across the region, mobiles are not just a communication device but also the primary channel for getting online and a vital tool to access life-enhancing services. This is particularly true in rural areas, where around half the population live and where the provision of these services by conventional means is constrained by acute funding, skills and infrastructure gaps. Mobile network assets and services, such as APIs, cellular IoT, mobile money and billing platforms, are enabling sustainable business models for key services across verticals in the region."

Furthermore, "The number of mobile internet subscribers in the region has quadrupled since the start of this decade; the technology is the only available platform for the majority of the population to get online. Over the period to 2025, nearly 300 million people will come online, the majority of them connecting via high-speed mobile broadband networks. Across the region, mobile money plays a key role in extending financial services to people with limited access to traditional financial institutions, particularly women and rural populations. There were 135 live mobile money services across the region at the end of 2017, with 122 million active accounts."

"As mobile operators edge towards full coverage of the more densely populated conurbations within the region," the report importantly notes that "the remaining unconnected populations are primarily located in rural areas where the economics of network rollout are more challenging. To extend connectivity to underserved areas and ensure long-term industry sustainability requires the establishment of relevant regulatory frameworks and investment-friendly policies to facilitate multi-year capex programs."

Lastly, the report notably asserts: "Two key policy enablers that can help support the continued growth of the mobile ecosystem are the implementation of the appropriate spectrum management framework, and tax reform to improve the affordability of mobile technology for consumers, especially those in low-income segments. Spectrum below 1 GHz has strong propagation characteristics and can be key to delivering universal broadband access, bringing socioeconomic benefits to people in cities and remote areas. Similarly, tax reform can enhance digital inclusion in the region, with positive knock-on effects for productivity and the wider economy." 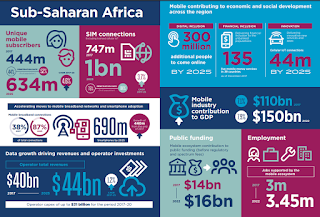 In its press announcement about the report, I support John Giusti's, Chief Regulatory Officer at the GSMA, comment that "[f]or many citizens across the region, particularly those living in rural areas, a mobile phone is not just a communications device but also the primary channel for getting online and a vital tool for improving their lives. More needs to be done to extend connectivity to the remaining unconnected and underserved populations across Sub-Sahara Africa, but this will require a focus on long-term industry sustainability that can only be achieved through investment-friendly policies and supportive regulatory frameworks."

Is there a particular aspect of the report that you find valuable to you personally or to your business?

Aaron Rose is an advisor to talented entrepreneurs and co-founder of great companies. He also serves as the editor of Solutions for a Sustainable World.
Posted by Aaron Rose at 2:52 PM