Is the US-China Trade War Creating Opportunities in Other Asian Countries? 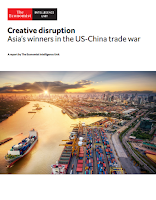 Achieving business success often involves a certain amount of luck in trying to predict the future, which is challenging enough during periods of normal business activity. However, at the time of writing this post, there is nothing 'normal' in the world of international business. Whether I agree or not with U.S. President Donald Trump's allegations that China plays unfairly in the game of international trade, his policies are forcing my colleagues and I to reexamine our business dealings and investment exposure as they relate to the Middle Kingdom. When evaluating our short- and long-term strategy is: Should we shift our focus to business opportunities in other countries, which may benefit from the US-China trade war?

A new report, Creative disruption: Asia's winners in the US-China trade war, by The Economist Intelligence Unit (The EIU) boldly claims "the US and China are rapidly discovering how wrong Donald Trump was when he said that trade wars are good and easy to win. The two countries have so far imposed tariffs covering roughly US$360bn of merchandise trade between them. A breakdown in negotiations suggests that neither side is yet seriously looking for an 'off ramp' in the dispute. The Economist Intelligence Unit expects that by early 2019 tariffs will have been introduced on the vast majority of US-China merchandise trade."

The report examines which countries in Asia will benefit most from the US-China trade war. It focuses on the comparative advantages in the economies of North-east, South-east and South Asia, examining the broader region overall, and discussing the opportunities and disruptions caused by the ongoing trade war. The report also focuses on the impact the US-China trade war may have on three important sectors: information and communications technology (ICT) products; automotives and automotive parts; and apparel and readymade garments (RMGs). This post focuses on the report's discussion on the ICT sector.

The EIU explains that "the ICT industry has been a particular focus for the US government as it has moved to increase tariffs on imports from China. This is partly because it is by far the biggest category of US imports from China, with electronics and related component imports alone amounting to some US$150bn of the total US imports from China of US$526bn in 2017. It is also because one of the aims of the US tariff strategy is to hamper the Chinese government's Made in China 2025 development agenda—an initiative focused on cultivating the country's key high-technology sectors."

The report importantly notes that "Vietnam and Malaysia will benefit the most from the US-China trade war, particularly in low-end manufacturing of ICT products, such as intermediate components and manufacturing of consumer goods like mobile phones and laptops. Major electronics companies have existing operations in these countries. Dell (US), Sony and Panasonic (both Japan) have plants in Malaysia, for example, while Samsung (South Korea) and Intel (US) have a presence in Vietnam. This means that they would be able to re-deploy investment and production relatively smoothly. In addition, both countries have strong road, rail and port infrastructure, which has in turn helped to develop strong local logistics and shipping networks to support merchandise trade."

As reflected in the picture above, "India, Indonesia and Thailand should also be able to secure some benefits from the relocation of export-oriented ICT manufacturing, according to the report. However, this type of export production is more limited in these markets than it is in Vietnam and Malaysia at present, meaning that international trade links in these markets may be underdeveloped."

With respect to the Philippines, the archipelagic country "will see mild disruption stemming from the trade war, owing to the importance of the Chinese market for shipments of ICT intermediate components from that economy." The EIU, however, does "not expect the Philippines to benefit massively from any shift in ICT export supply chains, owing to its weak regulatory and business environment. The country's underdeveloped digital ecosystem will also be a further hindrance to investment, with internet speeds the slowest in Asia."

For those companies engaged in the ICT sector in Japan, Singapore, South Korea and Taiwan, the report alarmingly says these countries "are set to experience even greater disruption from the trade war, particularly in the short term, owing to the importance of the Chinese market to exporters in those economies. China is a major destination for intermediate and final ICT goods from all four economies, meaning that companies in that sector will be heavily exposed to the impact of tariffs on demand for these products."

What is more, "High taxes, limited land and expensive labor will prevent significant reshoring of ICT manufacturing operations from China back to these four markets. However, the impact of the trade war on exports from South Korea, Japan, Taiwan and Singapore will be limited by the fact that all four tend to produce high-end ICT components that are not easily replaceable through import substitution. Thus, although the Chinese operations of companies from these economies may be disrupted, their domestic exports will be less vulnerable."

Having done business in China for several years, I agree with The EIU that "even before the start of the US-China trade war, multinational companies were becoming increasingly wary about the risk of becoming over-dependent on China as a manufacturing base. Such fears have been aggravated by a combination of rising labor and land costs in China. Meanwhile, markets in South and South-east Asia have looked increasingly attractive in their own right, as their consumer markets have developed."

Are you finding new opportunities in the ICT sector in Asian countries outside of China as a result of the US-China trade war?

Aaron Rose is an advisor to talented entrepreneurs and co-founder of great companies. He also serves as the editor of Solutions for a Sustainable World.
Posted by Aaron Rose at 5:45 PM