A report published by PwC says the Middle East and North Africa (MENA) region is young, with over 40% of people under 25. Furthermore, PwC asserts that youth unemployment in the region is among the highest in the world at 28%.

While it does not generate the headlines on the nightly news in the United States, many governments in the MENA region understand it must cut public expenditures by reducing the number of people on the public payroll. Some government officials in the region also recognize the important role a thriving private sector will play in helping young people find jobs. Not only will a growing private sector ease governmental budgetary pressure, but it will produce additional tax revenue.

Therefore, as my colleagues and I seek business and investment opportunities in the MENA region's information and communications technology sector, we read with great interest The Mobile Economy: Middle East and North Africa 2018. Produced by GSMA Intelligence, the research arm of London, England-based GSMA, the report presents four key points.


"By mid-2018, there were 381 million unique subscribers across the Middle East and North Africa (MENA) region, accounting for 64% of the population. Despite annual subscriber growth of 4% on average over the last four years, MENA remains the second least penetrated region in the world. There is, however, significant variation among countries in the region, from the advanced Gulf Cooperation Council (GCC) Arab States where 77% of the population on average are mobile subscribers, to Other Arab States such as Comoros, Djibouti and Somalia where subscriber penetration is around 30%."

The report importantly points out that "between 2017 and 2025, the MENA region will see the fastest subscriber growth rate of any region except Sub-Saharan Africa, growing above the global average at a CAGR of 2.5% to reach 459 million. By this time, 69% of the population will be mobile subscribers, only slightly behind the global average of 71%."

It is the report's second point that I found most valuable with respect to the future potential of the region's ICT sector. According to the GSMA, "In 2017, mobile technologies and services generated 4% of GDP in the MENA region, a contribution that amounted to just under $165 billion of economic value added. By 2022, the mobile economy in the region will generate around $200 billion of economic value added as countries continue to benefit from the improvements in productivity and efficiency brought about by increased take-up of mobile services."

The report crucially explains that "the mobile ecosystem supported more than 1 million jobs in 2017. This includes workers directly employed in the ecosystem and jobs indirectly supported by the economic activity generated by the sector.

"In addition to the impact on the economy and labor market, the mobile sector also makes a substantial contribution to the funding of the public sector, with more than $17 billion raised in 2017 in the form of general taxation."

Advanced MENA markets at the forefront of innovation

With respect to 5G technology, the report notes: "Some mobile operators, particularly those in some of the GCC Arab States, are seeking to be global leaders in 5G deployments, and are pushing ahead with tests and trial launches ahead of commercialization as early as 2019. These markets will exhibit relatively rapid 5G rollout, with adoption reaching 16% of total connections by 2025, slightly above the global average."

"Enhanced mobile broadband will be the key use case in early 5G deployments in the region, while applications and services for enterprises are tested and then introduced. There also exists a significant addressable market for 5G-based fixed wireless services, particularly in those countries with limited fiber penetration. In the enterprise space, there is broad agreement from MENA operators on the key industry verticals where 5G can deliver the greatest long-term value, including smart cities, utilities, mining and tourism."

What is more, "While the potential is clear, long-term monetization may require greater maturity of the 5G ecosystem – particularly for the more innovative and mission-critical services, such as autonomous vehicles and certain smart city applications. Key to this will be industry-wide collaboration and innovation centers, where companies from different sectors can experiment with the 5G ecosystem to develop new products and services."

On the topic of Internet of Things (IoT), the report says "the number of IoT connections across the MENA region will triple between 2017 and 2025, reaching 1.1 billion. Currently, the consumer and industrial IoT segments have equal shares of total IoT connections, but industrial IoT is where most of the growth will take place due to an increase in smart utilities, smart retail and smart city deployments."

Moreover, IoT revenue in the MENA region will increase at an average annual rate of 19% to 2025 to reach $55 billion. Applications, platforms and services account for the largest share of IoT revenue and will grow further as mobile operators continue to deploy different strategies and business models to move beyond offering connectivity only."

The report also discusses the topic of digital identity in that "the MENA region has exhibited rapid uptake of digital trade, driven by growth in mass connectivity and mobile device penetration, and more recently by advances in the provision of digital identity. Consumers are increasingly demanding to access services securely, shielded by robust privacy safeguards and strong data protection delivered by digital identity capabilities. To this end, Mobile Connect is a secure universal log-in solution which, by matching the user to their mobile phone, allows them to log-in to websites and applications quickly without the need to remember passwords and usernames, and with no personal information shared without permission. Turkey is a key market for Mobile Connect: Turkcell, for example, uses the solution for its Fast Login authentication application, and is hoping to develop additional services that will form the basis of new revenue streams."

Realizing the potential of a digital society

I concur with the report's authors that "public policy and regulation are key factors in the spread of mobile-enabled services across the MENA region. By setting the right regulatory context, governments can create incentives for mobile operators to continually upgrade and expand mobile services in the region. The GSMA encourages governments across MENA to review and recalibrate telecoms policy to advance the digital transformation and to reflect new market dynamics. Three key areas require close attention: 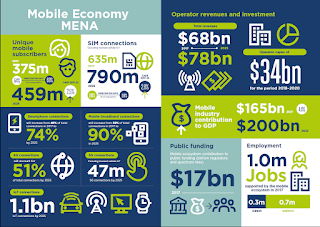 What role does the MENA region play in your business or investment strategy?