US-China Relations: Where Next?

On Mar. 6, 2019, The Economist Intelligence Unit (The EIU) held a webinar, "US-China relations: where next?" co-led by John Ferguson and Cailin Birch, The EIU's Director of Global Forecasting and Country Analysis, and Global Economist respectively. The webinar's content was presented in four parts:

THE STATE OF PLAY

Duties have been placed on roughly US$360bn worth of bilateral trade. Major tariff action includes the following:

A flurry of negotiations has taken place since Jan. 2019 including:
WHERE NEXT?

The webinar says a substantive trade deal looks unlikely as there are six areas of contention:

Prospects for a deal:
The webinar importantly noted that China's president, Xi Jinping, is a dominant leader but still wants to avoid being seen as caving to US demands. Mr. Xi is viewed more as an economic nationalist versus a globalist.

Moreover, the webinar explained ideological divisions with the US trade team will hinder future negotiations. US Trade Representative Robert Lighthizer and Peter Navarro, the Director of the National Trade Council at the White House, are considered ideological hardliners; whereas, Wilbur Ross and Steven Mnuchin, secretary of commerce and of the treasury, respectively, are deemed as economic pragmatists.

The Chinese credit cycle has begun to turn that alongside a trade deal with the US, China’s economy may perform better than many expect in 2019. Moreover, China’s gross domestic product (GDP) will slow in the first half of 2019 before picking up. 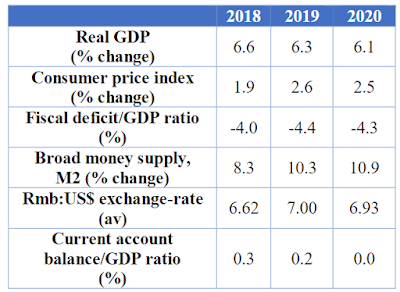 Chinese reforms and policies to watch:
And the US remains in a record long-term economic expansion, but the rate of growth will slow:
While not presented in the webinar, below is a forecast summary of real GDP growth (year on year) by percentage from The EIU's global outlook summary dated Feb. 13, 2019.

It is also imperative to understand the effect of the trade war on China's local economies, which may put pressure on the Chinese government to enter an agreement with the U.S. The EIU published an article on Sept. 26, 2018 explaining:

The impact of the trade war at the local level in China may be even more pronounced. We expect to see disruption in a number of provinces that rely heavily on trade for economic growth, including Guangdong, Jiangsu, Shanghai and Zhejiang. These areas are China's traditional export powerhouses, accounting for more than half of the country's total export flows in 2017. In addition, although the external sector occupies a smaller role in these provincial economies compared to a decade ago, trade growth remains an important pillar of economic activity: last year exports as a percentage of regional GDP stood at 50% in Guangdong, at almost 40% in Zhejiang and Shanghai and at around 30% in Jiangsu.

While presenting a slide, "All quiet on the investment front: Crossing the river by feeling the stones," Ms. Birch noted: "China has implemented reforms to its business environment over the last few years, but for the most part, these have been moderate and the process of putting them in place has been largely stagnant." She added: "The latest and broadest set of reforms [implemented by the Chinese government] was unveiled last June, by they only moved the needle forward slightly."

Some of the proposed financial-sector liberalizations are listed in the chart below, which was originally provided by The EIU in an article, "Is China really planning to open its financial sector?" dated Apr. 30, 2018. 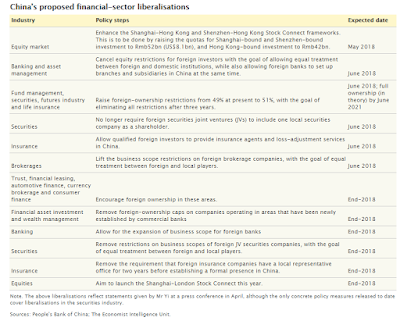 Ms. Birch said "the automotive, financial services more broadly, healthcare and critically, telecoms, remain either restricted or blocked to foreign direct investment." She acknowledged there have been some reforms in specific segments of the automotive and the financial services sectors, but only in "areas where Chinese domestic firms already have a very established competitive hold on the market."

The webinar further explained how security tensions between China and the US could become more prominent once a trade deal is reached:
In presenting a slide, "The fracturing of the technology landscape," Mr. Ferguson remarked that "both countries are looking for one to remain in the global power and the other one wanting to become the global power" in the global tech sector. He added: "You can almost think two types of trade war. There is the type we are talking about right now which maybe there is a trade deal as we believe, but there is a more fundamental trade war that will carry on and this falls in the area of technology."

The webinar concluded with the showing of the image below in a slide titled, "The end of engagement? US-China relations appear troubled in the long-term." 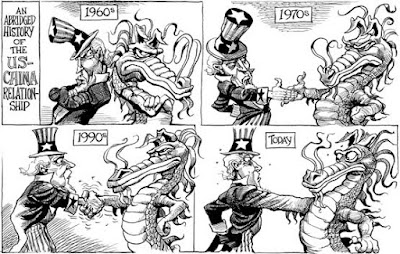 In an article published on Dec. 4, 2018, The EIU says it has "identified four possible scenarios for 2019, owing to the high degree of uncertainty around the dispute." The have attached a 50% likelihood to their baseline assumption (outlined below), with Chinese real GDP growth of 6.2% for the year. The have assigned a likelihood percentage and outline the key impact of each scenario. 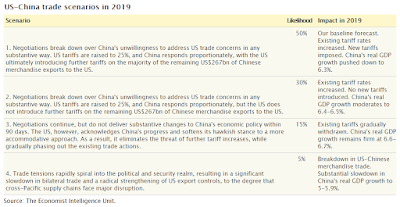 Lastly, as noted above, The EIU predicts a substantive trade deal between the US and China looks unlikely. In an article, "Settling for less," dated Mar. 4, 2019, The EIU writes:

Regardless of future developments, however, we expect US-China bilateral ties to continue fraying into the long term. This is because we do not expect US trade pressure to prompt China to introduce significant reforms to its economy, particularly as the country embarks on a conflicting policy push aimed at enhancing the role of both the central government and home-grown companies in economic affairs. The inability of the US to address these market access issues is likely increasingly to push US-China friction into areas of investment and technology policy, underpinned by a strategic rivalry aimed at technological dominance. The trade war remains far from over.

Where are your predictions for the future of US-China trade relations?

Aaron Rose is an advisor to talented entrepreneurs and co-founder of great companies. He also serves as the editor of Solutions for a Sustainable World.
Posted by Aaron Rose at 1:33 PM

Email ThisBlogThis!Share to TwitterShare to FacebookShare to Pinterest
Labels: China, EIU, trade, US