Democracy Was Dealt a Major Blow in 2020, Says EIU Report 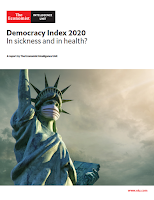 "Democracy was dealt a major blow in 2020," according to a report produced by The Economist Intelligence Unit (The EIU). Providing "a snapshot of the state of democracy worldwide in 165 independent states and two territories," the 13th edition of the Democracy Index, which was edited by Joan Hoey, Regional Director, Europe at The EIU, "covers almost the entire population of the world and the vast majority of the world's states (microstates are excluded)." The report disappointingly records a decline in their overall score, as country after country locked down to protect lives from a novel coronavirus.
The EIU explains that its "Democracy Index is based on five categories: electoral process and pluralism, the functioning of government. political participation. political culture, and civil liberties. Based on its scores on a range of indicators within these categories, each country is then itself classified as one of four types of regime: 'full democracy.' 'flawed democracy,' 'hybrid regime' or 'authoritarian regime.'"
What is more, "The main focus of the report is the impact of the coronavirus (Covid-19) pandemic on democracy and freedom around the world. It looks at how the pandemic resulted in the withdrawal of civil liberties on a massive scale and fueled an existing trend of intolerance and censorship of dissenting opinion. The report also examines the state of US democracy after a tumultuous year dominated by the coronavirus pandemic, the Black Lives Matter movement and a hotly contested presidential election. The results by region are analyzed in greater detail in the section entitled 'Democracy around the regions in 2020.'" 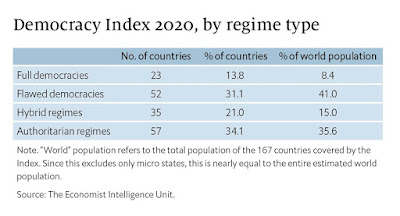 As indicated in the table above, "only about half (49.4%) of the world's population live in a democracy of some sort, and even fewer (8.4%) reside in a 'full democracy,'" according to The EIU's measure of democracy. "[T]his level is up from 5.7% in 2019, as several Asian countries have been upgraded. More than one-third of the world's population live under authoritarian rule, with a large share being in China."
The report adds that "75 of the 167 countries and territories covered by the model, or 44.9% of the total, are considered to be democracies. The number of 'full democracies' increased to 23 in 2020, up from 22 in 2019. The number of 'flawed democracies' fell by two, to 52. Of the remaining 92 countries in our index, 57 are 'authoritarian regimes,' up from 54 in 2019, and 35 are classified as 'hybrid regimes,' down from 37 in 2019."
Discouragingly, The EIU notes: "democracy has not been in robust health for some time. In 2020 its strength was further tested by the outbreak of the coronavirus (Covid-19) pandemic. The average global score in the 2020 Democracy Index fell from 5.44 in 2019 to 5.37. This is by far the worst global score since the index was first produced in 2006." Furthermore, "The 2020 result represents a significant deterioration and came about largely—but not solely—because of government-imposed restrictions on individual freedoms and civil liberties that occurred across the globe in response to the coronavirus pandemic." 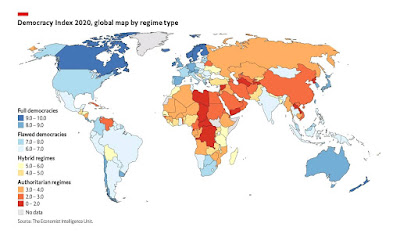 In explaining the map above, The EIU says:

The deterioration in the global score in 2020 was driven by a decline in the average regional score everywhere in the world, but by especially large falls in the "authoritarian regime"-dominated regions of Sub-Saharan Africa and the Middle East and North Africa. Their scores declined by 0.10 and 0.09, respectively, between 2019 and 2020. Western Europe and eastern Europe both recorded a fall in their average regional scores of 0.06. The score for Asia and Australasia, the region which has made the most democratic progress during the lifetime of the Democracy Index, fell by 0.05. Latin America's average score declined by 0.04 in 2020, marking the fifth consecutive year of regression for the region. The average score for North America fell by only 0.01, but a bigger decline of 0.04 in the US score was masked by an improvement in Canada's score.
In 2020 a large majority of countries, 116 of a total of 167 (almost 70%), recorded a decline in their total score compared with 2019. Only 38 (22.6%) recorded an improvement and the other 13 stagnated, with their scores remaining unchanged compared with 2019. There were some impressive improvements and some dramatic declines . . . with Taiwan registering the biggest improvement and Mali the biggest decline. There were 11 changes of regime category, seven negative and four positive. Three countries (Japan, South Korea and Taiwan) moved from the "flawed democracy" category to be classified as "full democracies" and one country, Albania, was upgraded to a "flawed democracy" from a "hybrid regime" previously. France and Portugal experienced a reversal, losing the "full democracy" status they had regained in 2019, re-joining the ranks of "flawed democracies." El Salvador and Hong Kong were relegated from the "flawed democracy" classification to that of "hybrid regime." Further down the ranking, Algeria, Burkina Faso and Mali lost their status as "hybrid regimes" and are now designated as "authoritarian regimes."

With a score of 9.81, Norway ranks #1 in the Democracy Index followed by Iceland (9.37), Sweden (9.26), New Zealand (9.25), and Canada (9.24). Rounding out the bottom five are Chad (1.55), Syria (1.43), Central Africa Republic (1.32), Dem. Republic of Congo (1.13), and North Korea (1.08) as the least democratic nation. As a citizen of the United States (7.92), I am disappointed to find my home country classified as a "flawed democracy" with a ranking of 25.
During a webinar to discuss the findings of the Democracy Index, Ms Hoey explained that the aim of the Democracy Index is not aimed to serve as an advocacy tool but to "provide an independent and robust measure of the state of democracy around the world and to shine a light on positive and negative developments. In doing that, we can play a role in holding governments to account." She added: "I think we also would like to stimulate a debate about the problems of democracy and potential ways in which governments and citizens improve matters."
What are your thoughts about the report's findings?
Aaron Rose is a board member, corporate advisor, and co-founder of great companies. He also serves as the editor of GT Perspectives, an online forum focused on turning perspective into opportunity.
Posted by Aaron Rose at 2:31 PM