Launched in 1977 by the National Aeronautics and Space Administration (NASA), America's space agency, to study the outer Solar System, Voyager 1 and 2 each carried a message in a phonograph record, a 12-inch gold-plated copper disk containing sounds and images selected to portray the diversity of life and culture on Earth. As explained by NASA's Jet Propulsion Laboratory (JPL), "The contents of the record were selected for NASA by a committee chaired by Carl Sagan of Cornell University, et. al. Dr. Sagan and his associates assembled 115 images and a variety of natural sounds, such as those made by surf, wind and thunder, birds, whales, and other animals. To this they added musical selections from different cultures and eras, and spoken greetings from Earth-people in fifty-five languages, and printed messages from President Carter and U.N. Secretary General Waldheim." (The Golden Record cover shown with its extraterrestrial instructions. Credit: NASA/JPL)
Interestingly, "The remainder of the record is in audio, designed to be played at 16-2/3 revolutions per minute. It contains the spoken greetings, beginning with Akkadian, which was spoken in Sumer about six thousand years ago, and ending with Wu, a modern Chinese dialect. Following the section on the sounds of Earth, there is an eclectic 90-minute selection of music, including both Eastern and Western classics and a variety of ethnic music. Once the Voyager spacecraft leave the solar system (by 1990, both will be beyond the orbit of Pluto), they will find themselves in empty space. It will be forty thousand years before they make a close approach to any other planetary system. As Carl Sagan has noted, 'The spacecraft will be encountered and the record played only if there are advanced spacefaring civilizations in interstellar space. But the launching of this bottle into the cosmic ocean says something very hopeful about life on this planet.'"
Now there is a new initiative to beam human voices to outer space. According to an article by The Economist, "In the Cascade mountains of northern California, a cluster of 42 radio telescopes points towards the stars, scanning for signs of life. The Search for Extraterrestrial Intelligence (SETI) Institute has been listening for a signal here and elsewhere since it was founded in 1984. In that time it has scoured only a minuscule fraction of space, equivalent to a glass of water in all the world’s oceans. But Jill Tarter, its co-founder, is undaunted. A renowned astrophyisicst—and the model for Jodie Foster's character in the alien-encounter film 'Contact'—Ms. Tarter says the program's aim is not just to communicate with remote civilizations. It is also to remind humanity of its own modest, fragile place in the cosmos. Which is why, for the first time, SETI is cocking its ear towards Earth."
SETI, which is based in Mountain View, Calif., "is looking for the same thing on this planet that it routinely seeks from others: a signal that can be beamed into space to represent the species. Felipe Pérez Santiago, a Mexican musician and composer—and artist in residence at the institute—has an idea of what might work. Since song, like the human voice, is common to all languages and nations, he and Ms. Tarter have devised the 'Earthling Project': a call to people everywhere to upload snippets of song that he plans to meld into a collective human chorus. An initial composition will be launched into space this summer, inscribed on a virtually indestructible disk alongside Wikipedia and the Rosetta Project, a sampling of 1,500 human languages. Future plans and dreams include an eventual dispatch to Mars."

To participate in the Earthling Project, simply download the app and submit your voice in their registry to be heard in space.
As The Economist points out: "Some elemental melodies endure for centuries: lullabies, mourning chants, songs of love or celebration, age-old tunes that lighten toil or praise a god. [...] the project's app stands ready to receive all these, and whatever else earthlings anywhere choose to contribute. Unlike other recordings sent into space, says Mr. Santiago, 'everyone's invited. You don't have to be one of the main composers of our history like Beethoven, just someone singing in their shower.' Download the app, warble up to three songs of 30 seconds each, and your voice will be dispatched into the firmament."
"Mr. Santiago pledges to use every submission," the article notes. "The ultimate plan is to throw open the whole database for musicians anywhere to sample. Understanding that all earthlings share a common planet 'is crucial for our long future,' Ms. Tarter says. 'We face challenges that have to be solved by co-operating across the globe.' In a small but symbolic way, the Earthling Project is meant to set an example."
As I write this blog post, I am reminded of The Carpenters' "Sing," the lyrics of which are sung by most parents in the English-speaking world (I remember my mom singing it to me): 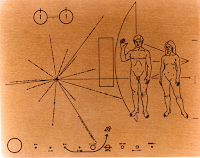 Learning about space exploration as an elementary school student, I was enthralled by the phonograph record carried by Voyager 1 and 2. And before Voyager, Pioneers 10 and 11, launched in 1972 and 1973, respectively, both carried small metal plaques identifying their time and place of origin for the benefit of any other spacefarers that might find them in the distant future (see left image). There is a certain amount of excitement to be part of something equally galactic. My wife and I will submit a 30 second opus to SETI's Earthling Project. Will you be doing the same? If so, just confirm that your phone is waterproof if making your submission from the shower.
Aaron Rose is a board member, corporate advisor, and co-founder of great companies. He also serves as the editor of GT Perspectives, an online forum focused on turning perspective into opportunity.
Posted by Aaron Rose at 11:52 PM