Risk Scenarios That Could Reshape the Global Economy in 2023 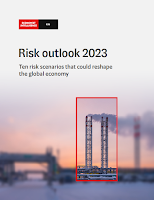 The Economist Intelligence Unit (EIU) produces an annual quantitative and qualitative assessment of economic, political and regulatory risks that help readers evaluate potential shifts in a country's operating environment. As this year's report explains, "In 2022 the global repercussions of Russia's invasion of Ukraine shifted global concerns away from coronavirus-related health issues and towards growing political, security and macroeconomic risks." The UK-based organization expects "that ripple effects from the war in Ukraine, global monetary tightening and an economic slowdown in China will weigh on the economy in 2023, with global growth slowing to only 1.6%." The EIU explains that its "white paper explores some of the risks that could lead to even slower growth, or even, trigger a global recession."
Below are ten risk scenarios that could reshape the global economy in 2023: 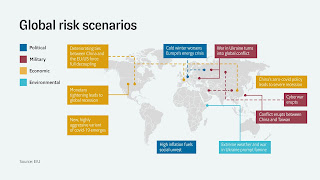 While I agree with the high placing of cold winter exacerbating Europe's energy crisis, I am more concerned with the risk of extreme weather adding to commodity price spikes which will result in exasperating global food insecurity. "Climate change models point to an increased frequency of extreme weather events," explains the EIU. "So far these have been sporadic and in different parts of the world, but they could start to happen more synchronously and for prolonged periods." Moreover, "Severe droughts and heatwaves in Europe, China, India and the US in 2022 are contributing to rising prices of some foodstuffs. In addition, the war between Russia and Ukraine (two of the world’s largest agricultural exporters) has led to severe price spikes and risks creating global shortages of grains and fertilizers (which are crucial for harvests) in 2023." The report worryingly warns that "The world could face a prolonged period of crop shortages and skyrocketing prices, raising the risk of food insecurity (or even famine).
Just as high food prices was a contributing factor that a series of anti-government protests, uprisings and armed rebellions that spread across much of the Arab world in the early 2010s, global food prices are again high could lead to social unrest. As the report notes, "Persistent inflationary pressures, caused by supply-chain disruptions and Russia's invasion of Ukraine, are pushing up global inflation, which is at its highest level since the 1990s. If inflation rises much higher than wage increases, making it hard for poorer households to purchase basic staples, it could spark social unrest." The report adds that "In an extreme scenario, protests could push workers in major economies and employed by large manufacturers to coordinate large-scale strikes demanding higher salaries that match inflation. Such movements, similar to those that have affected critical services in the UK (ports, postal services, barristers and railways), could paralyze entire industries and spill over to other sectors or countries, weighing on global growth.
Finally, my colleagues and I are closely watching the further deterioration in West-China ties that may result in the full decoupling of the global economy. "Western democracies, notably the US and the EU, are concerned about China's support to Russia following the invasion of Ukraine," the report explains. "In parallel, China is concerned about US-Taiwan relations and efforts by the US to convince other democracies to pressure it using restrictions on trade, technology and finance." Moreover, "The EU has also taken an increasingly confrontational stance towards China's human rights abuses in Xinjiang, unequal treatment of EU and Chinese firms, and its subsidy-led industrial model." The report adds that "In an extreme scenario, China could initiate military maneuvers in the South China Sea (most likely in Taiwan), exacerbating tensions and pushing the West to unite in imposing sweeping trade and investment restrictions on China. This would force some markets (and companies) to choose sides." China could, in retaliation, "block exports of raw materials and goods that are crucial to Western economies, such as rare earths. This would have disastrous economic effects and force companies to operate two supply chains while fearing operational disruptions."
Which risk scenarios do you think will affect your business? What strategies are you implementing to make your company resilient to those risks?

Aaron Rose is a board member, corporate advisor, and co-founder of great companies. He also serves as the editor of GT Perspectives, an online forum focused on turning perspective into opportunity.
Posted by Aaron Rose at 11:41 AM