Ghana: A Model for Democratic Elections 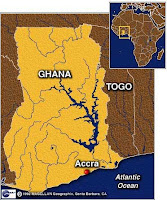 Voters in Ghana went to the polls on December 7, 2008 to elect a successor to President John Kufuor who is stepping down after serving the maximum two terms. According to the CNN article, "Nana Addo Danquah Akufo-Addo of the incumbent New Patriotic Party and John Evans Atta Mills of the National Democratic Congress are the leading candidates, but neither was able to garner more than 50 percent of the vote. The Ghanaian constitution requires a second round of balloting if no candidate wins a clear majority." At a time when African nations are looking for a leader in social and economic development including free democratic elections, Ghanaians are showing that they can serve as a role model in choosing government officials without corruption and violence that plagued Zimbabwe and Kenya's elections earlier this year.
Ghana is making an effort to become a leader, not just in West Africa, but for the entire African continent. I had the chance to meet Nana Akufo-Addo, Ghana's former Minister of Foreign Affairs, on June 4, 2008 in Washington, D.C. where he spoke at an event, "Democratic Governance and Economic Growth in Ghana," sponsored by the U.S. Institute of Peace and the Center for Strategic & International Studies (CSIS) Africa Program. Mr. Akufo-Addo talked about his vision for Ghana's future. Accra, Ghana's capital, should be the financial center for West Africa similar to how Dubai is becoming the financial capital for the Middle East. In addition, Mr. Akufo-Addo explained the recent discovery of offshore oil will help provide needed capital to the country, exploration and extraction should be done without damaging the environment or causing civil unrest like we are witnessing in nearby Nigeria. The discovery of oil, Mr. Akufo-Addo said, should benefit the Ghanaian people not foreign corporations.
There are fair reasons to criticize the Ghanaian government. The former British colony is the world's second biggest cocoa grower and Africa's second largest gold producer. Many Ghanaians, however, say they not have received the benefits from the increased wealth. In addition, cocaine trafficking last increased in West Africa over the past few years. Despite these issues and regardless which candidate prevails as Ghana's next president, Ghanaians should be proud to demonstrate the ability to exercise their democratic right to vote in a civil manner. As explained in the CNN article, "'All of us agreed that these were high quality, very transparent, orderly, peaceful, patient fine elections,' said observer John Stremlau with the Carter Center...'My colleagues with more experience than I have think these were probably the best elections they have observed.'"
Aaron Rose is a board member, corporate advisor, and co-founder of great companies. He also serves as the editor of GT Perspectives, an online forum focused on turning perspective into opportunity.
Posted by Aaron Rose at 1:48 AM