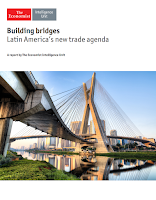 My previous post provides an overview of a whitepaper published by The Economist Intelligence Unit (The EIU) that focuses on quantifying market opportunities in Latin America's cities. This post addresses another EIU whitepaper that highlights Latin America's new trade agenda. Segmented in three sections: (1) An agenda for regional integration, (2) a new global trade agenda, and (3) economic benefits and political challenges, the whitepaper's key findings are copied below in its entirety:

I agree that "the Pacific Alliance will be central to regional integration efforts." The whitepaper further claims: "The Pacific Alliance touts itself as a market to rival Brazil or India in size. While it is true that the GDP of the four-country alliance exceeds that of Brazil, geographical obstacles and weaknesses in transport infrastructure mean that the Alliance is not a true single market. Yet it does have ambitious objectives that go beyond the free movement of goods (tariffs are set to be eliminated by 2020) to the free movement of services, financial resources and people."

Importantly, "the Pacific Alliance is, essentially, in the driver's seat in terms of developments that could bring real benefits in the form of increased foreign direct investment (FDI), economic diversification and raised productivity via the establishment of the value chains that South America currently lacks."

Lastly and most crucially, The EIU says:

Greater integration and free trade would bring real benefits for businesses investing in Latin America. Along with the reduction of tariffs and non-tariff barriers themselves, harmonization of rules of origin and regulatory standards, and a greater focus on trade promotion would bring more opportunities for trade and investment. Associated infrastructure development to support increased trade—backed by an improving regulatory and institutional framework for public-private partnership (PPP) projects—also represents an important potential driver of growth. Developed fully with a schedule of supporting structural reforms and investments in human capital, the trade and integration agenda could also lead to participation in global value chains from which the region is currently mostly absent. This could in turn be a driver of a move up the value chain and an increase in Latin America's productivity and economic growth.

Separately from its report, The EIU held a webinar, "Brazil: Back on track?" on June 29, 2017 about the future of Brazil in light of the corruption scandals surrounding the president, Michel Temer. The webinar poses three important questions:
Despite the political turmoil taking place in Brazil and Venezuela (the latter facing a significantly greater political and economic crisis compared to the former), deepening free trade and regional integration in Latin America presents an opportunity for businesses seeking to take advantage of a market where The EIU is forecasting a rise in the region's gross domestic product.

How does Latin America fit in your business's international growth strategy?

Aaron Rose is a board member, corporate advisor, and co-founder of great companies. He also serves as the editor of GT Perspectives, an online forum focused on turning perspective into opportunity.
Posted by Aaron Rose at 12:05 AM