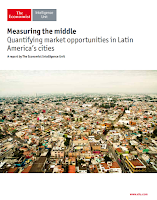 "For Latin America’s megacities (those with populations over 10m) and its rapidly-growing mid-sized cities alike, the burden on housing, basic services, transport infrastructure and the environment requires good governance, efficient long-term planning and the shrewd outlay of limited resources," explains a whitepaper, Measuring the middle: Quantifying market opportunities in Latin America’s cities, published by The Economist Intelligence Unit (EIU). "But the continued dramatic rise in the region's urbanized population also offers huge potential in the coming decades as the emerging middle class grows and expands into new cities." The report highlights some of the fastest growing city markets in the region and looks ahead to explore the opportunity and risks they will present, up to 2030.

Similar to other emerging and developing countries in Africa and Asia, Latin America will see growth in urbanization as people move from rural to urban areas. "Between 2016 and 2030 The EIU projects that more than 47m inhabitants will be added to the 122 largest cities in the region." Of these cities with populations above 500,000, in the next decade six will become megacities of more than 10m people, while the vast majority (112) will have fewer than 5m people and around one-quarter of these will have fewer than 1m residents." Furthermore, "In 2016-30 The EIU expects the number of people earning more than US$15,000 per year to more than double in these cities, increasing from 34.6m to 88.4m. The past decade has seen an even larger increase, from 13.7m in 2006."


Viewing the opportunity presented by Latin American cities purely in terms of the addressable market is a useful tool, but it should never be the only metric applied when assessing the potential of that market. Latin America has seen significant economic, political and social volatility in recent years, and any assessment of its urban middle class should be conducted hand in hand with appraisals of the other opportunities and potential pitfalls that any given market presents.

For example, while Mexican and Brazilian cities seem to offer the greatest opportunity in absolute terms to tap into Latin America’s burgeoning urban middle class, they will continue to pose operational challenges. Within the region, it is Chile that offers the most benign business environment, scoring 7.8 out of 10 in The EIU’s Business Environment Rankings (the highest score achieved by any Latin American country). Mexico scores 7 and Brazil 6.3, with opportunities in cities in both countries constrained by challenging labor markets, unstable political environments, inadequate infrastructure and difficult tax regimes (although they achieve much better scores for their policies towards foreign investment).

Aaron Rose is a board member, corporate advisor, and co-founder of great companies. He also serves as the editor of GT Perspectives, an online forum focused on turning perspective into opportunity.
Posted by Aaron Rose at 1:04 AM