An Analysis of 'Diagnosing Health Care in the GCC'

The following is a guest post by Haton AlFreidi. 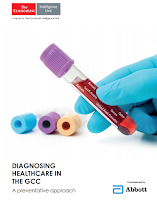 A report published by The Economist Intelligence Unit (EIU) and commissioned by Abbott discusses health care strategies in the six Gulf Cooperation Council (GCC) countries (Bahrain, Kuwait, Oman, Qatar, Saudi Arabia, and the United Arab Emirates). The report, Diagnosing Health Care in the GCC, begins by explaining how health and lifestyle in the GCC affected by the revolution of oil, causing the prevalence of chronic diseases, such as diabetes, cancer, heart diseases, and obesity in the GCC societies. One of the important key findings that is mentioned in the report was, the lack of professionalism in early diagnoses and the lack of awareness of the importance of preventive health care, appears to be one of the main causes of chronic diseases spreading among GCC citizens. Even though GCC governments provide free treatments to GCC citizens through their public health facilities, chronic disease figures are increasing compared to other countries.

The report goes over how the GCC countries are the leaders in obesity, diabetes, and genetic diseases compared to the world due to the high consumption of sugar sweetened food and depending on imported products rather than local production. It is also mentioned how smoking in all of it forms are accessible to the vast majority, and governments are not taking necessary actions to educate and prevent smoker numbers from growing. Therefore, it is emphasized on how early diagnosis is important to prevent and decrease the number of people who are affected with chronic diseases. In addition to changing GCC governments strategies from funding curing health care to include preventative health care too. By doing so, chronic diseases can be mitigated and numbers of affected people can be driven down.

But, to look more into the issue, we need to know why people are not going to hospitals until they have a health issue. The EIU report reveals a more depth information about public health, and what issues citizens of the GCC are facing. First, being treated in a public hospital is not an easy process. Second, having an appointment can take up to months. Third, most public hospitals are located in the cities so hospitals are not easily accessible to everyone. Fourth, shortage of workforce in all the hospitals divisions. Most importantly, the lack of trust citizens have toward hospitals due to the poor monitoring ministry of health is performing. And the same applies on private hospitals except that waiting time is less but at the same time it is more expensive for a low-quality treatment. This also contributed in decreasing the role of primary care, where the vast majority go to hospitals instead of a primary care.

Ultimately, the report suggests that GCC countries health sectors should start adapting and implementing a strategy of preventive approach instead of only a curative approach. Early diagnoses and screenings can help prevent most of these diseases along with having a more active lifestyle. Some GCC countries like Saudi Arabia and the UAE have started aiming toward healthier societies by implementing strategies in their visions encompassed within SA Vision 2030, and UAE Vision 2021 to adapt an encouraging environment for an active lifestyle, health public education, private sector involvement, and encounter tobacco and sugar sweetened products.

Some GCC governments started the journey of changing bad habits that existed for a long time by supporting outdoor events, create more indoor facilities and gyms especially for children and women, taxed tobacco and some sugar sweetened products such as soft drinks and energy drinks, applied a mandatory premarital screening to tackle genetic diseases. Also, many individuals started campaigns to spread awareness about chronic and genetic diseases, and one of the recent one is called Genome. The campaign started by targeting parents and educating them about the importance of early diagnosis for newborns, to reveal any genetic disorder or disease that can cause chronic illness such as physical disability. It was eventually adopted by the Saudi Arabian government where testing newborns is now a mandatory procedure. The Genome campaign is now continuing to other GCC countries and it is expected that some GCC countries are on their way to adopt newborns early diagnoses too.

Being a citizen from one of the GCC countries, I am not surprised by the high numbers of sugar consumption or chronic diseases rates that exists in our societies. Oil revolution contributed in starting a cycle among generations of replacing an active lifestyle with a passive lifestyle. However, I think adopting a preventative strategy is not sufficient to decrease the huge numbers of diseases. Chronic diseases are the result of years and years of bad habits, and the lack of a healthy culture.

Health sectors in the GCC need to work together and with other sectors such as ministries of education, ministries of media, and ministries of commerce and investment to work on changing the GCC societies understanding and awareness of early diagnoses and the importance of lifestyle on affecting health. Health education and awareness should start from early ages in schools. Also, weather is a big challenge in GCC countries that should be highly considered in affecting lifestyle and being active. Many GCC governments provided outdoor facilities to encourage people be more active, but with the extremely hot weather it is harder to do so. To conclude, I find the report rich with valid information and analysis, however, the suggested solutions are harder to execute with governmental strategy change and it need more collaboration among other ministries to have healthier societies as the described in some GCC countries visions.

Haton AlFreidi is a Research Analyst at ROI3, Inc. in Seattle, Wash. Born in Saudi Arabia, Ms. AlFreidi received a Bachelor of Arts in Business Administration in Finance and International Studies from Seattle University. She may be contacted at hatounfreidi@gmail.com.
Posted by Aaron Rose at 9:41 PM