"By mid-2017, there were 365 million unique subscribers across the Middle East and North Africa (MENA) region, accounting for 63% of the population," according to a report, The Mobile Economy: Middle East and North Africa 2017, produced by the GSMA. The report further says: "Global subscriber penetration overtook MENA during the course of 2015. As a result, MENA has fallen behind Asia Pacific to become the second least penetrated region in the world. There is, however, huge variation between countries in the region, from the advanced Gulf Cooperation Council (GCC) States where 76% of the population on average are mobile subscribers, to some of the other Arab States such as Comoros, Djibouti and Somalia where less than a third of the population subscribe to mobile services."

Regarding 5th generation mobile networks (5G), the report notes that "markets in MENA – particularly some of the GCC States – will be among the first countries globally to launch 5G networks, with commercial deployments planned in the UAE in 2019 and Qatar in 2020." Furthermore, "In the early years following these launches, operators in 12 other countries across MENA are expected to deploy 5G services, covering around 30% of the region’s population by 2025. By this time, regional 5G connections (excluding IoT) are forecast to surpass 50 million." 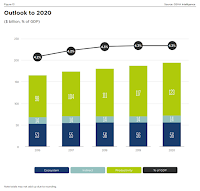 The mobile industry is contributing to the MENA's economic growth. "In 2016, mobile technologies and services generated 4.2% of GDP in the MENA region, a contribution that amounted to $165 billion of economic value. In the period to 2020 we expect this to increase to almost $200 billion (4.3% of GDP) as countries benefit from the improvements in productivity and efficiency brought about by increased take-up of mobile services." 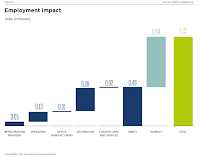 Encouragingly, the report further explains that "the mobile ecosystem also supported more than 1 million jobs in 2016. This includes workers directly employed in the ecosystem and jobs that are indirectly supported by the economic activity generated by the sector. In addition to the mobile sector's impact on the economy and labor market, it makes a substantial contribution to the funding of the public sector, with $20 billion raised in 2016 in the form of taxation."

The report also discusses how mobile is driving engagement and innovation in the MENA region. "Mobile has emerged as the platform of choice for creating, distributing and consuming innovative digital solutions and services in MENA, and the region is playing a leading role in certain areas. For example, some countries, particularly in the Gulf region (Saudi Arabia and the UAE, for example), are looking to address challenges around urbanization, pollution and resource management by implementing smart city services, while others (such as Turkey) are spearheading initiatives to provide individuals and businesses with secure and robust access to online services via mobile-based solutions."

In addition, "Mobile operators in the region are also increasingly collaborating with tech start-ups to help scale innovative and sustainable mobile services. By supporting these new and innovative digital players to secure the funding, resources and direction they require to bring their products and services to scale, mobile operators are helping to deliver the most impactful mobile solutions to those that need them most, and generating the greatest socioeconomic impact."

The large-scale societal adoption and use of digital technologies is a key driver of measurable economic, social and cultural value, including increased productivity, a rise in employment rates, improved security, and greater capacity to tackle social and environmental issues. Mobile internet penetration in MENA has doubled over the last six years, reaching just under 40% of the population by mid-2017.

Despite the steady progress, a vast digital divide remains in many parts of MENA, particularly in the developing countries: across the region, there are 350 million people without access to the mobile internet. As challenges around infrastructure, affordability, consumer readiness and content are addressed, an additional 67 million people are expected to gain access to the mobile internet across the region by the end of the decade, bringing the total to just under 300 million, or 48% of the population.

Given its reach of 5 billion people across the globe, mobile is also playing a key role in tackling various social and economic challenges as outlined by the UN’s Sustainable Development Goals (SDGs), including poverty, education, employment and sanitation. Mobile technology provides access to tools and applications that help address these issues, and enables new technologies and innovations to build more efficient and environmentally sustainable societies. 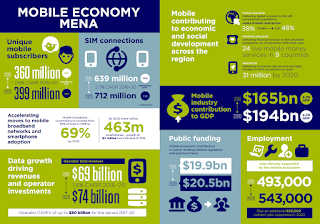 In a post about GSMA's 2016 report, I wrote that my colleagues and I recognize the successful creation and deployment of localized mobile software solutions in the MENA region will be based on establishing strong collaborative relationships with local developers, marketers, and channel partners. This statement is more true today as the mobile industry matures.

How are you engaging in the MENA region's mobile industry?

Aaron Rose is an advisor to talented entrepreneurs and co-founder of great companies. He also serves as the editor of Solutions for a Sustainable World.
Posted by Aaron Rose at 9:18 PM