A Tech-Driven Transformation in Africa is Making People Healthier, Wealthier, and Better Educated 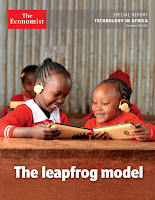 Since my first trip to the African continent in the 1990s, I have appreciated the correlation between advances in technology and the rise of socioeconomic development. From obtaining a drove of information from the world wide web through a desktop computer using a dial-up modem to transferring cash through a service optimized for mobile phones, it is amazing to witness such transformations in the lives of those whom live in developing countries. Therefore, I read with great interest a special report entitled "Technology in Africa" in the Nov. 11, 2017 issue of The Economist.

The report's leading article, "The leapfrog model: What technology can do for Africa," notes that across "sub-Saharan Africa, countries are on the cusp of a tech-driven transformation that is already beginning to make people healthier, wealthier and better educated at a pace that only recently seemed unimaginable."

Providing some historical context of technological advances in Africa, the article explains:


The first taste of these new possibilities came when mobile phones swarmed across the continent a decade ago. Within just a few short years hundreds of millions of people were able to phone and text for the first time, bypassing monopolistic state-owned phone companies that kept customers waiting for landlines indefinitely. And leapfrogging over old technologies and business models with mobile phones quickly made other sorts of leaps possible. Thanks to M-Pesa, a service that lets people send money through their phones, everyone with a phone suddenly also had, in effect, a bank account in their pocket. As mobile money has lowered transaction costs, it has brought down barriers to innovation in all sorts of other areas, allowing lenders quickly to assess credit risks, insurers to sell life and medical cover in small chunks and new energy firms to sell electricity by the day or week.

What is more, "Some of these innovations are emerging from the thriving tech hubs that are popping up across Africa, but most of the technology transforming the continent comes from elsewhere. The $50 smartphones on which apps connect motorcycle taxis and customers in Rwanda are Chinese, for instance. However, these technologies are often being combined in new ways to solve uniquely African problems. If you want to book a truck to move your cow, or get an ambulance to go to hospital, you will probably turn to an African startup."

The article importantly mentions that "much of the money going into African technology comes not from philanthropists but from hard-nosed investors looking for attractive returns. In 2016 African tech firms raised a record $367m. Although paltry by the standards of Silicon Valley, this is helping to stimulate the setting up of firms such as Flutterwave, a Nigerian payments company, and Zipline, which uses drones to deliver blood to clinics in Rwanda."

Not all of the news, however, is so optimistic:


Technology is advancing far more slowly in Africa than it is in the rich world, so the gap has been widening in recent years. "The poverty gap is a technology gap," says Kwabena Frimpong Boateng, Ghana's science and technology minister. It is also a knowledge and education gap. Three-quarters of children in their third year of schooling in Kenya, Uganda and Tanzania are unable to explain the meaning of the sentence "The name of the dog is Puppy" after reading it aloud. If the education system cannot prepare youngsters for jobs in a tech economy, Africa risks falling even further behind.

The do it yourself method of learning, which I have witnessed all so well during my travels to Africa, continues to thrive. The article explains that "given an opportunity to grasp that technology, many in Africa do so with both hands. In a tech hub in Lagos, Nigeria, enthusiastic youngsters tap away on laptop computers, practicing coding skills that many have picked up through online portals such as Udacity or by watching YouTube videos." Furthermore, "Jean-Claude Bastos, who sponsors an annual innovation prize in Africa as well as a tech hub in the slums of Luanda, Angola, recalls how alarmed he was when he first put a 3D printer into the center, only to find that the youngsters there immediately dismantled it. 'They took it apart, then put it back together, then did it again. Now if anything in it breaks they rebuild it on intuition, like it is a motorbike or car,' he says."


A cluster of new technologies promise to have a huge impact on Africa, not least because they can help solve some of Africa's biggest and longest-standing problems. These include weak state-run education systems, a high burden of disease, broken infrastructure and low productivity on farms and in factories. What made mobile phones so much more important in Africa than in the rich world was that for hundreds of millions of people they were the first and only form of telecommunication available. Equally, if a vaccine is developed for malaria, it will make little difference in the rich world but could save millions of lives in Africa. 'Investments in health R&D for HIV, tuberculosis, malaria and other diseases will be a massive boon for poor countries where the disease burden is highest,' says Bill Gates, whose foundation funds some of this research. 'The same is true for innovations like better seeds that enable poor farmers to increase crop yields.'

The Economist's special report is presented through the following articles:


How do you think technology will transform the lives of people living in Africa?

Aaron Rose is a board member, corporate advisor, and co-founder of great companies. He also serves as the editor of Solutions for a Sustainable World.
Posted by Aaron Rose at 3:24 PM