The Global Healthcare Industry Will Experience Many Changes in 2018 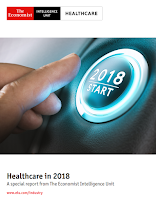 My previous post focused on The Economist Intelligence Unit's (The EIU) report, Industries in 2018, that forecasts how six industry sectors (automotive, consumer goods and retail, energy, financial services, healthcare, and telecoms) will develop globally over the coming year. This post focuses on report's discussion of the healthcare industry, which asserts the continuing policy chaos in the United States, China's health reforms and the preparations for Brexit as the biggest challenges for companies.


"US attempts to overturn Obamacare will still head the agenda in 2018, but other countries may have more success with their reform plans," the report explains. "Efforts to overturn the 2010 Affordable Care Act (ACA, commonly known as Obamacare) have loomed over the US healthcare sector in 2017 and are likely to do so again in 2018. Whereas the Republicans spent much of their first year in office trying to draft and pass reforms to 'repeal and replace' Obamacare at the national level, over 2018 they will focus on dismantling the current system from the inside." The EIU asserts that "as the system crumbles, there will be increased pressure from the public and from industry to come up with viable alternatives. Individual states are already stepping into the breach."

The report notes that "what happens in the US will be vital to the global healthcare and pharmaceuticals sector over the coming year." Furthermore, The EIU "expects US healthcare spending to reach US$3.5trn, which is around 44% of the global total (based on the 60 biggest economies). Pharmaceutical spending will reach around US$444bn, or around 36% of the global total, despite efforts to rein back prices. No other market will come close: health spending in China and Japan, the nearest contenders, is less than one-sixth as high."

With respect to China, the world's most populous country will see important changes in 2018. The Chinese "government will continue with its efforts to broaden and deepen the national healthcare system. This will involve implementing the numerous reforms begun in 2017 or earlier. Two of the three public health insurance schemes, the New Rural Co-operative Medical Scheme and Urban Resident Basic Medical Insurance, are gradually being merged. Tax breaks introduced in mid-2017 will encourage more people to take out top-up private insurance."

In the meantime, China's family-doctor system will expand, and hospitals will start to adopt new management procedures. These will include new payment schemes and a double-invoice system intended to reduce hospitals' reliance on mark-ups from selling pharmaceuticals. Pressure on pharmaceutical prices will increase still further. However, other measures will be aimed at improving drug quality and speeding up the approval of innovative medicines. This follows a ruling in October 2017 allowing companies to use foreign trial data to support their applications.

It is a packed agenda, and not all of it will work. As is usual in China, many of the reforms will be done on a pilot basis in particular regions and cities, and even when the policies are supposed to be national, implementation will vary across the country. Pharmaceutical companies will have to adapt quickly to cope with the changes and to benefit from market growth, which we expect to be around 8% in local-currency terms but just 3% in US dollar terms.

India will be starting to implement the National Health Policy it unveiled in March 2017, which aims to provide free drugs, diagnostics and emergency services to all Indians through public hospitals. Indonesia will be scurrying to meet its goal of universal coverage by 2019, while the Philippines has a similar goal for 2022. Pakistan will continue to pilot the prime minister's National Health Insurance Programme for low-income households.

Many countries in Latin America and the Middle East, as well as Russia, will be reassessing funding for healthcare as their economies recover from the effects of low global commodity prices. In Mexico, for example, the government has promised to unify public healthcare services into a universal social service, while Brazil's government is considering introducing a compulsory health insurance system. South Africa is due to release its long-awaited plans for health insurance in late 2017, although they may be delayed again.

Lastly, listed below, in its entirety, are items to watch for in 2018:
What changes do you predict to occur in the healthcare industry in 2018?

Aaron Rose is an advisor to talented entrepreneurs and co-founder of great companies. He also serves as the editor of Solutions for a Sustainable World.
Posted by Aaron Rose at 10:03 PM