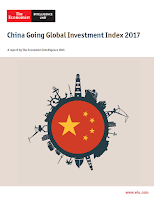 According to a report by The Economist Intelligence Unit (The EIU), "The outlook for China's overseas direct investment (ODI) appears to have dimmed. After a bumper year for deal-making in 2016, ODI flows from China slumped by over 40% year on year in the first ten months of 2017." The EIU's China Going Global Investment Index 2017 ranks 60 major economies across 57 indicators, distributed across four sub-indices spread between an "opportunity" pillar and a "risk" pillar. In addition, The EIU developed six separate indices covering six industries: automotive, consumer goods, energy, financial services, healthcare and telecommunications. Their coverage in this update to the index is slightly less than the previous versions in 2015 and 2013, when they included 67 countries. (I wrote about the 2015 version in a post on this blog.)

The report encouragingly suggests that "it is still an exciting time to be watching the international expansion of corporate China, and The Economist Intelligence Unit (EIU) views the recent drop in ODI flows as temporary. Although approval processes may be more complicated, Chinese companies will still feel impelled to venture overseas for similar reasons as they did before—to drive higher revenue by tapping new markets and acquiring better technology." Moreover, "The roll-out of the Belt and Road Initiative (BRI), a government strategy announced in 2013 to boost trade and investment links between China and over 60 (mainly developing) countries, has also given an additional impetus for some firms."

The main takeaways from the 2017 update to the China Going Global Investment Index include:

The report begins its conclusion by explaining:

The 2017 slump in Chinese ODI is unlikely to be a reflection of the future trend. China's ODI stock as a share of its GDP was only 10.9% in 2016, a much lower level than in large developed economies such as the US (28.9%), Japan (27.6%) and Germany (57%). This suggests that there is still plenty of room for growth, and the drivers of ODI from China in recent years—a desire to grasp global market share and acquire technology, brands and resources—remain in place. We expect that China's ODI flows (on a balance-of-payments basis) will return to growth in 2018.

The EIU also predicts that "we will probably not see a return to the exuberant deal-making of 2016. The government has heightened supervision over overseas investment and it is likely to remain concerned about risks posed by excessive capital outflows for several years yet." Furthermore, "An expected tightening in domestic credit conditions could also have an impact on ODI by making it more difficult for companies to tap bank lending. This will encourage firms to align their plans with areas where financing is still available, such as under MIC 2025 or the BRI."

Are the report's findings useful to your business?

Aaron Rose is a board member, corporate advisor, and co-founder of great companies. He also serves as the editor of GT Perspectives, an online forum focused on turning perspective into opportunity.
Posted by Aaron Rose at 10:09 PM