Having done business in the world's second largest continent, I concur with a report's assertion that the "rise and fall of interest in Africa has been contingent on its promise for growth." Published by The Economist Intelligence Unit (The EIU), the report adds: The demographic advantage and increasing per-head income spur investors but the regulatory complexities and political risks they encounter turn sentiment. Businesses on the continent are innovative and eager to expand but this is often impeded by limited access to new markets and growth finance. Delivering on the promise of economic growth is closely tied to the ability of home-grown businesses to scale up, so policymakers must establish an environment that enables businesses to thrive.

Sponsored by the Dubai Chamber of Commerce and Industry, Promise and perils: Scaling up businesses in sub-Saharan Africa "examines the factors enabling businesses in sub-Saharan Africa (SSA) to scale up." The report considers "the policy environment, state of technology and infrastructure, and financing options that allow businesses to access markets in other countries on the continent and beyond. In addition, it explores the role of foreign investors in facilitating business expansion, focusing on those based in the" six Gulf Co-operation Council (GCC) countries: Bahrain, Kuwait, Oman, Qatar, Saudi Arabia and the United Arab Emirates.

The report's key findings include:

The report correctly explains that "financing has long been a bugbear. A quarter of African" small and medium-sized enterprises "surveyed by the European Investment Bank between 2011 and 2017 said access to finance was their biggest obstacle. Improving the depth, speed, cost and variety of financial tools is central to business growth, whether it be from commercial banks, PE, VC, development finance institutions and even crowd-funding."

Furthermore, "PE, which tends to focus on more established firms looking to scale up, closed 1,022 deals worth US$25bn across Africa between 2013 and 2018" as reflected in the chart below. "VC also seems to be gathering a healthy head of steam: African start-ups enjoyed an almost fourfold increase in VC funding in 2018, raising a record US$725m across 458 deals. They are receiving bigger tickets above the US$5m mark too."

"In terms of investment through PE and VC," the report notes "information technology (including internet services), financial services and consumer goods and services have attracted the highest volume of investments over the past five years." As indicated in the chart below, "The fintech sector was, in 2018, by far the largest draw for finance-raising. The data show that EdTech is the fourth biggest draw, which, combined with cleantech at second, shows the centrality of social and environmental narratives to business in Africa. Other sectors of note in Africa include mobility, which is drawing interest from foreign start-ups." 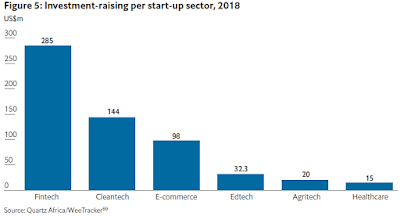 I agree with the report's conclusion that "Africa's growth recovery offers hope the continent can return to its GDP surge in the earlier part of the millennium—but only if its businesses can scale within and across borders. Policy improvements, including trade and customs unions, financial harmonization, and transport integration, are helping companies build regional footprints."

Encouragingly, "Start-ups are attracting VC from some of the world's biggest brands and reaching the international stage through global IPOs. But a perception challenge remains, with many citing political risks as an impediment."

Lastly, "As businesses on the continent scale up, foreign investors are playing an important role on two fronts: building infrastructure that enables African businesses to scale and investing directly in SMEs to facilitate growth."

Do you agree with the findings of the report?

Aaron Rose is a board member, corporate advisor, and co-founder of great companies. He also serves as the editor of GT Perspectives, an online forum focused on turning perspective into opportunity.
Posted by Aaron Rose at 7:45 PM