Deal Activity to Female-Founded Startups Has Improved, but Roadblocks Remain 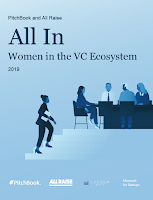 A report sponsored by Microsoft for Startups and Goldman Sachs' Launch With GS accurately asserts: "The VC industry has historically been a boys' club. Women have been underrepresented on both sides of the table as investors and as company founders. Considering that women make up half of the world's population and an even larger percentage of buying power, this underrepresentation is a problem not only for talented female entrepreneurs, but also for an industry that relies on scalable ideas to reach its potential."

The report, however, encouragingly notes that "[p]rogress has been made in recent years, and the oft-cited figures mask some of these improvements. For example, deal activity to female-founded startups has quadrupled over the last decade. In 2010, 823 VC investments were made in startups led by women; by 2018, that figure rose to 3,477, and 2019 is on pace to come close to that mark. This indicates that more women are becoming VC-backed entrepreneurs every year, and we expect that number to keep growing as supportive networks for female entrepreneurs continue to expand."

Released on Nov. 11, 2019, PitchBook-All Raise All In: Women in the VC Ecosystem highlights global and US-focused trends surrounding female-founded companies and female-led VC funds throughout the last decade.

The report's main findings include:

Some cities are better than others for female founders. New York and Los Angeles see comparatively high tech deal activity relative to Silicon Valley, despite Silicon Valley's much larger ecosystem.

What it means: Female founders can utilize these datapoints to determine which ecosystems (and VC firms) to target when they're on the fundraising trail.

Female-founded startups have a consistent history of exiting faster than male-led startups. Moreover, female-founded companies are exiting as a faster rate year-over-year compared to their all-male counterparts.

What it means: This reaffirms past research on enhanced business performance for female-founded companies. Venture investors, family offices, foundations and other prospective startup investors can use these datapoints to bolster their arguments for investing in more female-founded startups.

Only 12% of US VC checkwriters are women. Past research has found that female general partners are twice as likely to back female founders. Many (if not most) investment pitches are initiated by company founders, who approach investors looking for an opportunity to talk about their companies, and there are numerous indications that female founders often actively seek out VC firms with female checkwriters to pitch to.

What it means: VC firms can help in a big way by hiring or promoting more women into checkwriting roles. They will likely see an increase in incoming deal flow and open themselves to opportunities that other firms may miss.

56% of limited partners have women in decision-making roles. Limited partners are the original capital source for the entire VC industry, and where they invest their money has a significant downstream effect on future deal flow.

What it means: LPs can play a role, as well. They can use their influence to push for female-focused funds-of-funds, which are funds that take stakes in funds instead of startups. Such funds would ultimately provide more resources for female founders and provide an initial source of capital for female investors looking to set up their own VC firms. 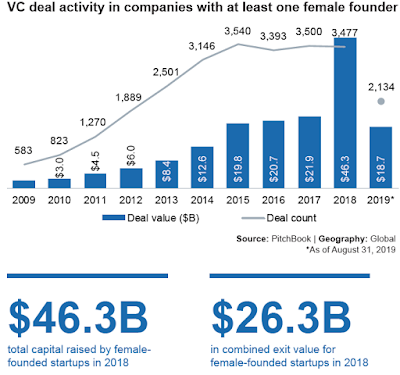 What is more, "The gradual rise in female-founded startups can be traced to several factors, including market awareness of the gender imbalance, stronger mentorship networks for women and more women entering the venture side of entrepreneurship."

Are you investing in female-founded startups?

Aaron Rose is a board member, corporate advisor, and co-founder of great companies. He also serves as the editor of GT Perspectives, an online forum focused on turning perspective into opportunity.
Posted by Aaron Rose at 2:32 PM