In a recent conversation with colleagues who are developing an app for my consultancy, Global Tactics, we talked about how coding has changed since 2013 when ROI3, Inc., a company that I co-founded to develop apps for people in China to learn specialize English language terminology. One such development is the increasingly number of platforms that provide the opportunity to build no code mobile apps. As this website explains, "No code platforms offers you a visual environment that lets you build apps and designs using drag and drop, add/remove components, and other hassle-free features. In short, a no code tool helps you build apps without writing codes." (Image Credit: UN Conference on Trade andDevelopment (UNCTAD), Geneva)
In addition to increasing productivity for businesses and saving on costs, no code platforms provide businesses with the ability to quickly create custom solutions for day-to-day problems and diversify who is able to build apps. This is particularly important for businesses in developing countries in Africa, Asia, and Latin America where a skills gap, which is a phrase used to describe the difference between the skills employers want as shown by their job advertisements and those that are available from workers looking for a job, impedes on a business' ability to develop technology services and applications.
The conversation with my colleagues then pivoted to the value of creating a no code platform that is optimized for mobile devices. While I have yet to come across such mobile-enabled platforms (they may exist and I simply am unaware of them), these platforms will have a profound impact on people living in developing countries where mobile phones are ubiquitous.
I prefer using my smartphone rather than a laptop for some tasks such as reading the news, conducting investment or banking transactions or checking my social media feeds. There are certain tasks, however, that remain easier to complete using a laptop or desktop including drafting documents, creating spreadsheets or presentations, and updating Global Tactics' website. In other words, limitations remain in a smartphone's functionality to perform certain tasks that businesses will need to complete in order to improve productivity.
Even registering a business with a government agency generally requires the use of a laptop or desktop. But this is changing. According to an article by Ian Richards, an economist at the United Nations working on development finance and digital government, an entrepreneur in the African nation of Benin, was able to log "into monentreprise.bj (in English, mybusiness), Benin's new business registration website. Within ten minutes on her smartphone she had entered her information, photographed and uploaded her identity documents and paid by credit card. Two hours later, an email arrived with her certificates of incorporation, and her business was officially created."
The entrepreneur, Mr. Richard explains, "benefited from a UN digital government platform, called eRegistrations, which now places Benin, jointly with Estonia, as the fastest in the world in which to start a company, jumping ahead of New Zealand, Georgia and Hong Kong, China. The EU average is three days, in New York it is seven days.
He adds: "ERegistrations operates in seven other developing countries (Argentina, Cameroon, El Salvador, Guatemala, Iraq, Lesotho and Mali) with installation underway in two more (Bhutan and Cuba). The aim of the UN's platform is not to beat world records, but to make official procedures more accessible and transparent, particularly for small businesses."
In his article, Mr. Richard interviews "Laurent Gangbes, who runs Benin's investment and export Promotion agency (APIEx), which operates monentreprise.bj, implemented with the help of Dutch funding, is proud of what it has achieved."
"'Entrepreneurs and foreign investors told me they wanted to set up a business from their mobile phone so as to avoid unnecessary travel,'" Mr. Gangbes said. "'We brought together several government services and worked to simplify forms and cut procedures to the strict minimum required.'
"'This shows that when it comes to digital government, African countries are leapfrogging ahead of the rest of the world to be the best,' he added." 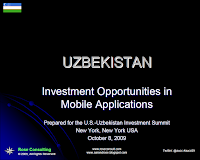 In my presentation at the U.S.-Uzbekistan Investment Summit in 2009, I advocated for a variety of mobile applications and services that would benefit the people of Uzbekistan. Over a decade later, it is encouraging to see such services become available for people in a small but growing number of developing countries. In addition to the deployment of government services, I am confident no-code platforms optimized for mobile devices will become widely available worldwide in the near future. Such platforms will be key reducing the skills gap, which will allow for workers to thrive at growing enterprises.
Do you agree?
Aaron Rose is a board member, corporate advisor, and co-founder of great companies. He also serves as the editor of GT Perspectives, an online forum focused on turning perspective into opportunity.
Posted by Aaron Rose at 10:43 PM