Writing the Forward for a report produced by the International Telecommunication Union (ITU), the United Nations specialized agency for information and communication technologies (ICTs), Doreen Bogdan-Martin, director of the ITU Telecommunication Development Bureau, says "An estimated 4.9 billion people are using the Internet in 2021, according to latest estimates in this 2021 edition of Measuring Digital Development: Facts and figures. That means that roughly 63 percent of the world's population is now online – an increase of 17 percent – with almost 800 million people estimated to have come online since 2019. Internet penetration increased more than 20 percent on average in Africa, in Asia and the Pacific, and in the UN-designated Least Developed Countries (LDCs)."
Moreover, according to Ms. Bogdan-Martin, "It is clear that ICTs and the Internet have been vital in helping maintain continuity in business activity, employment, education, provision of basic citizens' services, entertainment, and socializing. Digital platforms and services have enabled countless innovations that helped mitigate the health, social and economic costs of the tragedy, and build resilience against future crises."
Key findings of the 2021 edition of Facts and Figures, ITU's annual overview of the state of digital connectivity worldwide, include:
The digital gender divide is narrowing globally, but large gaps remain in poorer countries.
The urban-rural gap, though less severe in developed countries, remains a major challenge for digital connectivity in the rest of the world.
A generational gap is evident across all world regions.
ITU continues monitoring the world's evolving digital divide. 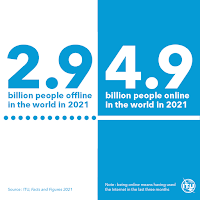 The digital divide, which is the gulf between those who have ready access to the Internet and those who do not, is a topic often discussed on this forum. And while it is encouraging to see entrepreneurs launch tech startups in low- and middle-income countries, the success of these new enterprises and the benefits their digital platforms and services can bring to consumers is limited if people are unable to access the Internet. As Ms. Bogdan-Martin insightfully notes in the report, "We cannot close the digital divide if we cannot measure it. And we cannot connect the unconnected if we do not know who they are, where they live, and why they remain offline – nor can we measure the success of our policies to bridge the gap.
"Through a set of unique and timely statistics, ITU’s Facts and figures sheds light on the multiple facets and evolving nature of the digital divide and takes stock of the progress towards closing it."
What do you think of the report's findings? What are your recommendations for bridging the digital divide?
Aaron Rose is a board member, corporate advisor, and co-founder of great companies. He also serves as the editor of GT Perspectives, an online forum focused on turning perspective into opportunity.
Posted by Aaron Rose at 6:01 PM