China to Benefit From Declining US Interest in the MENA Region 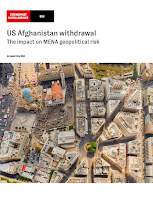 Those who follow geopolitical events in the Middle East are speculating how United States' withdrawal from Afghanistan will impact matters in the region. A paper published by The Economist Intelligence Unit (The EIU) focuses on this topic as it "examines which countries in the region could be next to be destabilized by the external competition to result from the US withdrawal. The paper "also outlines which countries could benefit economically from a growing relationship with China" and "aims to help investors in the region understand how geopolitical risk, and international tensions in particular, have shifted with the US’s exit."
Helping "investors to better understand relative risk across the region," below are the paper's key findings:
According to The EIU, "The criticism that the US president, Joe Biden, has come under for the US withdrawal from Afghanistan suggests that further sudden US troop withdrawals from conflict zones are unlikely for now. Remnants of Islamic State in Iraq and Syria will probably mean that some US presence, albeit a reduced one, stays there in the medium term." The paper further asserts that "the US will continue to maintain its security alliances, ensuring it remains the main foreign security presence in the region. However, it is clear that a key part of US foreign policy is to avoid being drawn into lengthy and costly conflicts in the region—preventing Iranian nuclear proliferation perhaps being the only exception. As a result, Turkey, Russia and China have more scope to become regional powerbrokers." 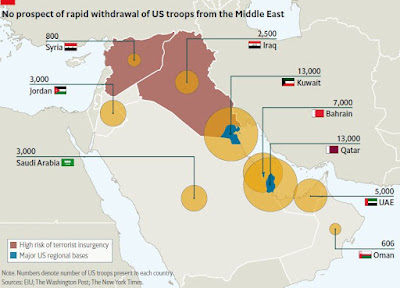 With respect to China benefiting from long-term US withdrawal from the region, the paper explains that "China has little interest in competing with the US for regional security dominance. But there are economic incentives for China to expand its presence—the Middle East provides key trade routes from Asia to Europe and East Africa as part of its Belt and Road Initiative, and is the source of much of China's oil supply."
The EIU importantly adds:

Although US influence remains paramount for Israel, which may limit Chinese opportunities there, most other countries will deepen their economic ties with China. Provided Iran secures US sanctions relief, Chinese infrastructure investment in Iran is likely to rise sharply in return for cut-price oil. At the same, the Gulf economies will build closer relations with China, while still balancing their alliances with the US, as a source of much-desired technology-sharing and external financing. Meanwhile, China's growing influence will also put it in a prime position to secure reconstruction contracts in conflict zones like Libya and Syria. In the longer term, as its economic interests grow, geopolitical neutrality will become more difficult. But in the short to medium term, China's interests in the Middle East will remain largely economic.

Lastly, the paper includes The EIU's MENA Risk Tracker Scores for Political Stability and Security Risk (see images below) where Yemen and Qatar are ranked most and least risky, respectively, for both political stability and security risk. 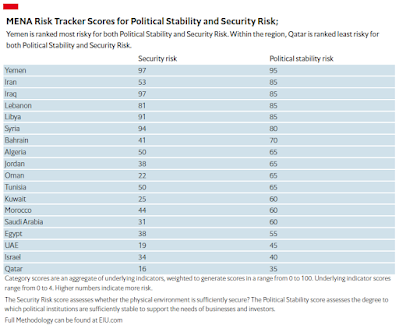 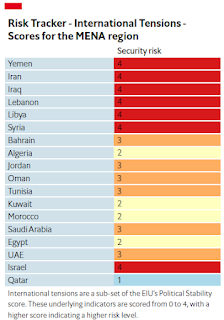 How do you think the United States' withdrawal from Afghanistan will impact matters in the MENA region?
Aaron Rose is a board member, corporate advisor, and co-founder of great companies. He also serves as the editor of GT Perspectives, an online forum focused on turning perspective into opportunity.
Posted by Aaron Rose at 11:13 PM