During my time serving as an advisor to a German tech firm in the late 2000s, I had the opportunity to learn more about Europe's tech sector. While the United States was experiencing a rise of its own tech sector, I was surprised at the lethargic growth of the sector in Europe. As explained by The Economist, "That a continent shattered by two world wars produced far fewer businesses destined for high growth in the second half of the 20th century is perhaps unsurprising. But Europe never recovered its appetite for high-growth business creation. In the past three decades, America has spawned four behemoths—Google, Amazon, Tesla and Facebook, now known as Meta—whose valuations have topped $1trn."
What is more, "Not one of Europe's corporate youths, meanwhile, has risen as high as $100bn. One champion of the 2000s, Skype, was in 2011 bought for $8.5bn by Microsoft. The other, Spotify, is today worth only $48bn. SAP, the closest thing the continent has to a tech giant, was founded three years before Microsoft and is worth less than a fifteenth of it."
Over a decade later from advising the German tech firm, I was pleased to read an article by Ryan Browne, a technology reporter for CNBC in London, proclaiming "Europe's tech sector is on fire." Focusing on a report produced by Atomico, a UK-based venture capital firm, Mr. Browne writes that "Start-ups in the region are on track to haul in a record $121 billion in funding this year ... roughly three times the $41 billion of capital raised in 2020. It's the first time European start-ups have raised more than $100 billion in a single year, and highlights surging interest from investors in the continent's rapidly-growing tech industry."
"'It's been a defining year for European tech,' Tom Wehmeier, Atomico's head of insights, told CNBC. 'I think what we've seen in the numbers is that European tech is creating value faster than ever.'"
Titled the State of European Tech 2021, below are the report's key findings:
While the report paints an optimistic scene, "Not all is rosy in European tech," CNBC's Mr. Browne notes. "Despite venture-backed companies raising record levels of funding in Europe, early-stage firms are being squeezed, according to Atomico." Moreover, "Less than 1% of venture capital invested in the first nine months of 2021 went to companies that were founded this year, a figure that has typically ranged from 1-3% in earlier years."

Mr. Browne also points out that "diversity remains a key issue. Only 1.3% of venture capital funding in Europe goes to start-ups with ethnic minority founding teams, Atomico said, citing a survey of more than 5,000 tech professionals in the region." And "the lack of pension fund allocation to start-up investments" is another hurdle "with European pension funds earmarking less than 0.02% of their $3 trillion for venture capital funds."
"Yet change is in the air," the aforementioned article by The Economist explains. "Venture capitalists, who want to sniff out the next Google while it is still being run from the founders' kitchen tables, are homing in on European startups. There are many more to choose from. European entrepreneurs who would once have gone west to start a business are now likely to start up at home rather than in Silicon Valley." 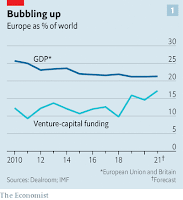 The Economist adds that "A new influx of capital is proof of an altered mood. Ten years ago, European firms grabbed less than a tenth of all venture capital (VC) money invested globally, though Europe’s share of global GDP was a little over a quarter." Encouragingly, "This year has seen dealmaking volumes soar in many regions, but particularly in Europe, which now attracts around 18% of global VC funding, says Dealroom, a data provider (see chart 1). That funding is at an all-time high, pumping up values for European startups. The continent now boasts 65 'unicorn cities,' or those which have produced a privately held startup worth more than $1bn. That is more than any other region."
What are your thoughts about the sate of Europe's tech sector? What opportunities or risks are you seeing?
Aaron Rose is a board member, corporate advisor, and co-founder of great companies. He also serves as the editor of GT Perspectives, an online forum focused on turning perspective into opportunity.
Posted by Aaron Rose at 5:33 PM