"North America will reach 300 million mobile subscribers in 2018, growing to 313 million or 84% penetration by 2020," according to a report published by the GSMA Intelligence, the research arm of London, England-based GSMA. The Mobile Economy North America 2017 continues to explain that "with many subscribers owning more than one connected device, and the cellular M2M market continuing to grow, the total number of connections will be higher, at 585 million by 2020."

Companies that are developing mobile hardware and services for the North American market should note that "US subscribers account for 90% of regional market, and the country is the largest market in the world in terms of mobile revenue. North America as a whole accounts for more than a fifth of total global mobile revenue at $250 billion in 2017." 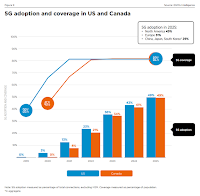 With respect to 5G technology, "North America is expected to see the same rapid pace of adoption of 5G services as seen with 4G. The region will reach 100 million 5G connections in 2023, four years after launch, as it did for 4G." The report further says: "5G adoption will occur faster than in any other region – around half of connections will be on 5G networks by 2025, compared to around 30% in Europe and the leading Asian markets (China, Japan and South Korea in aggregate)." As represented in the infographic at the end of this post, by 2025, there will be 208 million 5G connections in North America representing 49% of all connections. 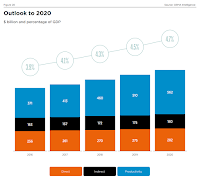 Furthermore, "The mobile ecosystem supported 2.5 million jobs in 2016. This includes workers directly employed by mobile operators and the wider mobile ecosystem, and jobs that are indirectly supported in the rest of the economy by the activity generated by the sector. The sector also makes an important contribution to the funding of the public sector, with $110 billion raised in 2016 in the form of general taxation, including sales taxes, corporate taxes and employment taxes." 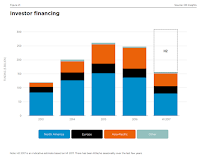 As for investor financing to support technology developments and innovation in North America, "private equity companies, venture-capital firms and corporates have invested more than $0.5 trillion between 2012 and 2016 to finance tech start-ups and emerging companies across several sectors – TMT, energy/utilities, automotive/transportation, healthcare and banking/ finance." Importantly, "Digitization of industry is a fundamental catalyst for VC financing; it is expanding the value chain in many sectors and opening up new roles and opportunities."

The report correctly points out that AI "is the next frontier": "While the AI industry is currently dominated by six platform players – Google, Amazon, Apple, Facebook, Microsoft and IBM – US mobile operators are increasingly focusing on AI through venture-capital (VC) investments, technology and business ventures (e.g. Verizon's Exponent) and R&D (e.g. AT&T's Lab), with widespread recognition that AI is key to business transformation and IoT developments."

Moreover, "AI creates opportunities for US and Canadian mobile operators to optimize their networks and CRM systems, and increase operational efficiencies. Greater learning of customer behavior and preferences will also enhance B2C/B2B services within and beyond core businesses. Meanwhile, new challenges are emerging, such as the rise of voice-driven, Wi-Fi connected AI-based devices (e.g. Amazon Echo, Google Home), which are increasingly becoming a control point for the connected home."


Are you developing mobile hardware or software services for the North American market? If so, what are the challenges you are encountering?

Aaron Rose is an advisor to talented entrepreneurs and co-founder of great companies. He also serves as the editor of Solutions for a Sustainable World.
Posted by Aaron Rose at 2:21 PM