Being familiar with the Latin American and Caribbean region, I see opportunities to support the development of products and localized services in cloud computing, financial technology (fintech), connected devices, artificial intelligence, medical technology (medtech) and mobile applications (particularly in health and education). Therefore, I read with great anticipation a report by GSMA Intelligence, the research arm for London, England-based GSMA, which says, "Across Latin America and the Caribbean, smartphone adoption has accelerated to reach 59% of total connections by the first half of 2017." The report adds that "in the largest markets, adoption has grown particularly quickly: since the beginning of 2016, almost 85 million new smartphones are in use in the region, with Brazil adding more than 20 million and Mexico 18 million."

The Mobile Economy Latin America and the Caribbean 2017 claims, "By 2020 the region will have an adoption rate of 71%, ahead of the global average of 66%. This translates into an additional 171 million new smartphone users across the region by the end of the decade." 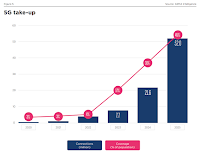 With respect to 5th generation mobile networks (5G), the report explains that "although the focus for both operators and consumers is currently 4G, 5G coverage will begin to expand rapidly by the middle of the next decade to reach just under 50% by 2025. Total 5G connections will exceed 50 million by 2025, nearly 5% of the global total. Adoption will expand once coverage reaches critical mass in key markets, led by Argentina and Mexico."

The report encouragingly says the mobile ecosystem is a major contributor to the regional economy. "In 2016, mobile technologies and services generated 5% of GDP in Latin America, a contribution that amounted to $260 billion of economic value added. In the period to 2020, this will increase to $320 billion (5.6% of GDP), as the region experiences strong growth in productivity brought about by continued adoption of mobile internet." 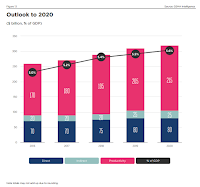 Furthermore, "The mobile ecosystem supported 1.7 million jobs in 2016. This includes workers directly employed by mobile operators and the ecosystem, and jobs that are indirectly supported in the rest of the economy by the activity generated by the sector. The sector also makes an important contribution to the funding of the public sector, with almost $35 billion raised in 2016 – mainly in the form of general taxation, including VAT, corporate taxes and employment taxes."


Based on my experiences of working in the region, the report correctly notes, "Latin America boasts some of the most advanced mobile internet users globally. ... Combined with Latin America's rising smartphone adoption and 4G usage, the mobile ecosystem provides a large, scalable platform for entrepreneurs and innovators." What is more, "With nearly 350 million mobile internet subscribers currently, and 420 million by 2020, the Latin American market is larger than the US and in 2020 will rival the EU in size." 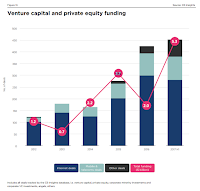 Chapter 2.7 addresses the fact that the local startup environment is flourishing. "Venture capital and private equity funding has been especially strong in 2017, with more transactions (453) in the first half of 2017 than in all of 2016, which itself was a record year. Moreover, the number of deals has been rising strongly each year since 2014." The report, however, adds that "most deals are for small dollar amounts – and the amounts are often not disclosed – the number of deals is a better indicator of the health and momentum of the startup environment."

With respect to mobile's role in addressing social challenges, the report disappointingly explains,

Despite progress made to date, still too many people across Latin America and the Caribbean are digitally excluded. By 2020, nearly 250 million will remain excluded; these are predominantly in rural areas, in lower income classes and more likely to be women. The mobile ecosystem must address challenges and perceptions around safety and security if it is to connect these people, as well as tackle a lack of digital skills and affordability challenges.

On the topic of regulatory reform, the report accurately says, "The converging digital ecosystem is highly dynamic, fast-paced and modular. Rising consumer demand for data requires new technologies and significant investment. At the same time, the industry is moving forward to connect the unconnected and serve the nascent Internet of Things (IoT) sector. This all poses regulatory and policy challenges for both the current and future digital ecosystem. With that in mind, policymakers must seek to support and enable the digital ecosystem."


What opportunities do you see for developing products and localized services for the Latin American and Caribbean market?


Aaron Rose is an advisor to talented entrepreneurs and co-founder of great companies. He also serves as the editor of Solutions for a Sustainable World.
Posted by Aaron Rose at 9:04 PM