Global Economy Will Be Poorer by 2050 Due to Climate Change, Says EIU Report 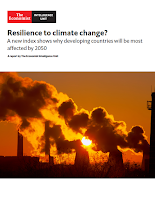 "The world will be poorer in 2050 due to the impacts of climate change," according to Resilience to Climate Change: Why developing countries will be most affected by 2050, a paper published by The Economist Intelligence Unit (The EIU). "How much poorer, and the distribution of this loss, is the goal of our new study into the economic impact of climate change."

By 2050, The EIU expects "the global economy to be 3% smaller than our baseline projections. At the country level, climate research to date has shown that it is most likely that those countries that are poorer and with higher average temperatures that will be the most affected."

The paper, however, contains three case studies demonstrating that "this does not have to be a prescription of how the impacts will unfold in a given country; governance, institutional quality and policy effectiveness all have the potential to curtail economic losses." These case studies "highlight the importance of both economic development and policy effectiveness to tackle climate change."

The paper further explains that "[i]nstitutional quality matters for a country's resilience to climate change via two policy areas: adaptation and mitigation policies. Adaptation policies," according to The EIU, "are defined as a country's initiatives and costs undertaken to adapt to climate change, as opposed to mitigation policies that aim to reduce emissions. Such policies are wide-ranging and country-specific, but may include: building flood defenses, improvements in water storage, protection of energy and public infrastructure, improvement in agricultural infrastructure, marine forecasting and early warning systems for aquaculture industries."

As reflected in the image below, the paper finds that: 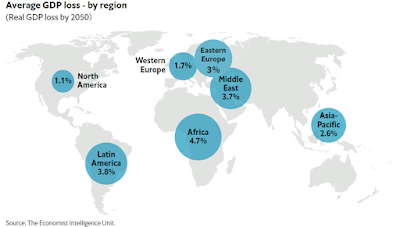 Lastly, The EIU presents its climate change modelling framework that combines "elements of the Dynamic Integrated Climate-Economy (DICE) model, developed by American economist and 2018 Nobel laureate, William Nordhaus, and our new Climate Change Resilience Index. A truncated version of the DICE model is used to capture the global impacts of climate change and the central assumptions that are made at the global level. The truncated DICE framework is then linked with a country-level Resilience Index for the 82 countries that The Economist Intelligence Unit forecasts out to 2050, thus enabling the economic impact of climate change to be estimated at the country level."

The eight indicators that make up the index are:
What economic development initiatives and policies should governments implement to tackle climate change?

Aaron Rose is a board member, corporate advisor, and co-founder of great companies. He also serves as the editor of Solutions for a Sustainable World.
Posted by Aaron Rose at 3:38 PM