In a press release about its new report, the GSMA, a UK-based industry association, "highlighted North America as one of the most advanced mobile regions in the world – a result of significant operator investments in 5G." Authored by GSMA Intelligence, the research arm of the GSMA, The Mobile Economy: North America 2019 "forecasts that almost half of the region's mobile connections will be running on new 5G networks by 2025. This is being fueled by operator spending on new networks, which is forecast to total more than $380 billion (Capex) between 2018 and 2025. These investments are increasingly being focused on building-out 5G coverage across the region, enabling a range of new services for consumers and enterprise."

The report reveals that:

On the topic enabling the transition to a zero-carbon economy, the report importantly says: "Mobile technology's biggest impact on climate change comes from its ability to enable other sectors of the economy to reduce their greenhouse gas (GHG) emissions. Operators in North America are providing connectivity for digital solutions that reduce GHG emissions, such as by reducing energy use or travel and transport."

Moreover, "As part of its efforts to fulfill the delivery of the UN Sustainable Development Goals (SDGs)," the report explains that "the mobile industry is making a specific commitment to SDG 13: Climate Action, reflecting the urgent need to accelerate action to limit global warming to 1.5°C by 2050."


Regarding connected devices (Internet of Things or IoT), the report notes: "The advent of 5G strengthens the development of the IoT market in North America, which will increase by 3.6 billion connections to a total of 5.9 billion connections by 2025." What is more, "Though short-range technologies (e.g. Wi-Fi and Bluetooth) will retain a dominant presence, licensed cellular technologies will provide connectivity for an increasingly large number of trusted connections. Underpinned by operator deployments, LTE-M and NB-IoT will both experience robust growth."

As for cybersecurity, the report explains: "From e-commerce to online banking, online services provide myriad benefits, such as increased convenience and access to cheaper products. However, it also exposes consumers to privacy and data protection risks. In 2018, there were 1,244 data breaches in the US, which revealed nearly 450 million records – a 100% increase compared to 2017. Rising cybercrime is fueling consumer privacy and security concerns, which are the primary reasons for inactivity online." 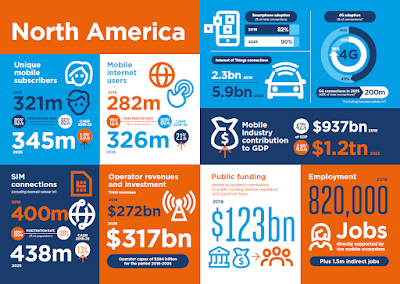 What investment or business opportunities are you seeing in North America's mobile industry?

Aaron Rose is a board member, corporate advisor, and co-founder of great companies. He also serves as the editor of GT Perspectives, an online forum focused on turning perspective into opportunity.
Posted by Aaron Rose at 2:53 PM