2020 Will See a Pick-Up in Global GDP Growth and Global Trade, Despite Continuing Trade Tensions 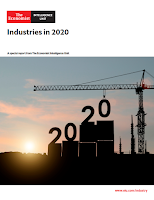 "After a gloomy year, the world's major industries are looking for an upturn in 2020. However, much will depend on policies in the US," says a report by The Economist Intelligence Unit (The EIU), the research arm of The Economist, in its Industries in 2020 report.

In its Industries in 2019 report, The EIU "highlighted five major risks that could undermine global business during the coming year. Four of those risks came true: the deepening of the US-China trade war, an emerging market downturn, tussles over technology and sanctions on Iran. These all dented economic growth and consumer confidence, dragging down sales across several business sectors during 2019. The fifth risk we mentioned, Brexit, has still not happened, but continues to overshadow business in Europe."

The EIU is "expecting a pick-up in global GDP growth and global trade in 2020, despite continuing trade tensions. However, regional trends will diverge, leading to mixed growth forecasts for the six major business sectors covered in this report: automotive, consumer goods and retailing, energy, financial services, healthcare, and telecoms. While there will be opportunities on offer, there are six factors that will determine the direction of these industries in the coming year:

What is more, "These factors will affect all six of the industries covered in this report, to varying degrees.

"The automotive sector, which has tumbled in 2019, will benefit somewhat from the recovery in many emerging and developing markets. We see car sales heading into positive territory after dropping in 2019. However, commercial vehicle sales in particular will come under pressure from global trade trends as the US continues to threaten vehicle-producing countries such as Mexico, Germany, Japan, South Korea and China with increased tariffs. Brexit will also bring enormous challenges for Europe's vehicle sector, particularly for UK-based producers.

"Consumer markets will also be badly affected by global trade tensions, particularly in the electronics sector, while the political turmoil in Hong Kong will dent sales of luxury goods. This, combined with retail’s greater reliance on developed markets and the rise of online retailing, will slow global retail sales. We expect retail sales to rise by just 2.2% in volume terms, down from 2.5% in 2019.

"For the energy sector, the pledges made under Paris Climate Change Agreement in 2016 will begin to take effect in 2020, making this the base year against which 2030 targets will be judged. However, with the US on the brink of withdrawing from the agreement, global progress will be slowed. The target of slowing global warming to less than 2 degrees centigrade is looking increasingly unattainable, unless the US election results in an unexpected policy change. The oil sector will also be vulnerable to political shocks, although we expect slow consumption growth to keep prices range-bound.

"The financial services sector will see little uplift from accelerating global growth, because it will be more affected by the slowdown in core OECD markets. The economic weakness of developed markets will keep interest rates low, maintaining the pressure on banking and investment margins. Several major financial hubs, including Hong Kong and London, will also be fragile amid difficult political conditions. However, the expansion of digital banking will hold immense promise for increasing financial inclusion in emerging markets.

"For the healthcare sector, too, the US presidential elections will be a particular watershed. Debates will rage over healthcare reform and drug pricing. With other countries also bearing down on prices but expanding access to healthcare, we expect global health spending to accelerate sharply, while spending on pharmaceuticals slows.

"In the telecoms sector, investment in 5G and fiber fixed-line services is likely to be a top priority in 2020. However, companies will have to invest with little certainty of a return and with regulation still uncertain. Moreover, the US-China trade war will continue to pose a major risk, given the dominance of Chinese companies such as Huawei in the build-out of telecoms infrastructure."

The report adds: "As a result of these trends, our key global forecasts for the six industries covered by this report are:

"Despite these mixed forecasts, there will be opportunities on offer for companies that are competitive and international enough to take advantage. Even so, they will have to be nimble to adapt to rapid changes in the business and political environment."

Lastly, The Economist produced a video presenting its predictions for the top stories of 2020.

What are your predictions for 2020?

Aaron Rose is a board member, corporate advisor, and co-founder of great companies. He also serves as the editor of Solutions for a Sustainable World.
Posted by Aaron Rose at 11:07 AM