The previous post focuses on a report by GSMA Intelligence, the research arm of the GSMA, a UK-based trade organization, about how the mobile technology sector is predicted to reach just over $220 billion by 2023 in the Middle East and North Africa (MENA) region. "The 2020s will see 5G activities become more widespread across the region. . . . By 2025, there will be 45 million 5G connections across the region, accounting for 6% of total mobile connections." The rise of 5G in the MENA region will lead to the adoption of connected devices or Internet of Things (IoT). This is the subject of another report published by GSMA Intelligence.

IoT connection growth in MENA second only to Asia-Pacific

"IoT connections in the Middle East and North Africa (MENA) region are growing at a rate second only to Asia-Pacific. With a well-established smart city vision acting as a catalyst for the IoT market, initiatives from governments and the mobile industry are expected to be fundamental in helping IoT revenues reach $55 billion by 2025. The commitment to and innovation in IoT seen across MENA is also expected to benefit the GDP of the regional economy to the tune of $18 billion in 2025."

Operators need to move beyond connectivity to monetize IoT

"The region's IoT ecosystem (which includes operators, IoT vendors, systems integrators and business customers) needs to exploit the synergies available from 5G-based IoT deployments to innovate, adopt and deploy new services. These include 'applications, platforms and services' – a category of IoT services expected to win a majority share of the market worth more than $30 billion by 2025. To take a greater share of the IoT revenue opportunity, operators need to move beyond connectivity into strategic partnerships with ecosystem players and even governments to launch new value-added services."

Governments play a pivotal role as policymakers and customers

"Mobile operators and the ecosystem as a whole cannot gain traction without the vision and support of regional and national policymakers to develop the IoT market and capture the social, commercial and economic benefits available. Governments can play a pivotal role as both policymakers and customers, as they have their own digital transformation agendas. National governments can encourage IoT market growth through regulation (e.g. smart fire alarms) and by exploiting the power of IoT sensors and automation to enhance public services."

"This report illustrates the market potential across MENA's IoT ecosystem and points to growth trends in smart cities, industrial IoT and consumer IoT. But it also recognizes the challenges, with the biggest likely to be around security and data protection. The region has a strategic opportunity to lead on security by design and ensure cybersecurity and data protection are built in from the start. The GSMA and mobile industry have contributed to the security initiative by introducing the GSMA's IoT Security Guidelines and IoT Security Self-Assessment. This report includes examples of best practices from the global regulatory environment."

"Mobile operators possess foundational assets and capabilities for targeting the IoT ecosystem in the form of 5G and NB-IoT networks, the power of the SIM, and key customer-facing channels and partnerships to help take IoT propositions to market. Operators are in the process of establishing these assets in the IoT ecosystem, making them vital to the success of IoT services in the region." 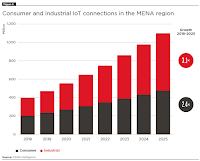 Based on other reports and conversations my colleagues and I recently had with business leaders and government officials in the MENA region, there is a focused effort to rapidly scale the industrial IoT industry. The report encouragingly notes: "Adoption of IoT among enterprises will drive overall IoT growth in the region, resulting in industrial IoT connections overtaking consumer in 2018 and forming the majority of connections (57%), reaching 624 million in 2025 (see Figure 5). Governments in the region are both major customers and policy enablers of this industrial IoT."

Moreover, "Utility companies are installing smart meters to monitor customers' use of energy or water in near real-time, cutting costs and helping balance supply and demand. For example, Egypt and UAE utilize IoT-enabled water management to deal with insufficient groundwater reserves. Kuwait's Ministry of Electricity & Water in partnership with Zain and SAP is connecting over 1 million smart electricity and water meters, enabling real-time access to usage and billing data."

Lastly, "Smart buildings will continue to be the largest industrial segment throughout the forecast period, followed by smart metering."


Which IoT applications, platforms and services do you think will succeed in the MENA region?

Aaron Rose is a board member, corporate advisor, and co-founder of great companies. He also serves as the editor of GT Perspectives, an online forum focused on turning perspective into opportunity.
Posted by Aaron Rose at 2:56 PM