By 2023, mobile's contribution to Sub-Saharan Africa's economy "will reach almost $185 billion (9.1% of GDP) as countries increasingly benefit from the improvements in productivity and efficiency brought about by the increased take-up of mobile services," says a report produced by GSMA Intelligence, the research arm of UK-based GSMA.

The report also reveals that:

With respect to supporting sustainable development through mobile-enabled services, the report points out that "[a]s the final decade of the UN Sustainable Development Goals (SDGs) approaches, mobile technology will play an increasingly important role in accelerating progress. The impact of mobile will be particularly profound in developing regions, such as Sub-Saharan Africa, which face an uphill task to achieve the goals due to acute resource and infrastructure shortages. The mobile industry's support for the SDGs is demonstrated in three main ways:
The report also explains that "[a]rtificial intelligence (AI) and blockchain – two of the most widely discussed transformative technologies over the last three to five years – are beginning to attract considerable interest in Sub-Saharan Africa. In April 2019, Google opened its first AI Lab center in Africa, located in Accra, Ghana, in addition to supporting machine intelligence programs at the African Institute for Mathematical Sciences center in Rwanda. In May 2019, Microsoft launched its Africa Development Center (ADC) with two initial sites in Nairobi, Kenya and Lagos, Nigeria, with local developers expected to focus on transformative technologies, such as AI and machine learning. AI and blockchain have the potential to help address a variety of social and economic challenges in the region, as evidenced by some of the use cases and applications being implemented." 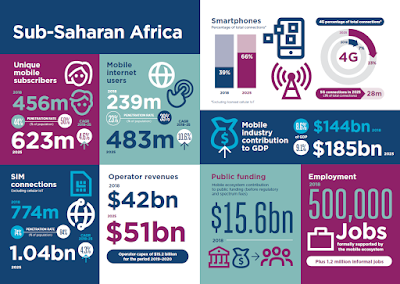 What mobile solutions do you think will transform the lives of millions of people across Sub-Saharan Africa? Do you agree that AI and blockchain have the potential to help address a variety of social and economic challenges in the region?

Aaron Rose is a board member, corporate advisor, and co-founder of great companies. He also serves as the editor of GT Perspectives, an online forum focused on turning perspective into opportunity.
Posted by Aaron Rose at 11:06 PM